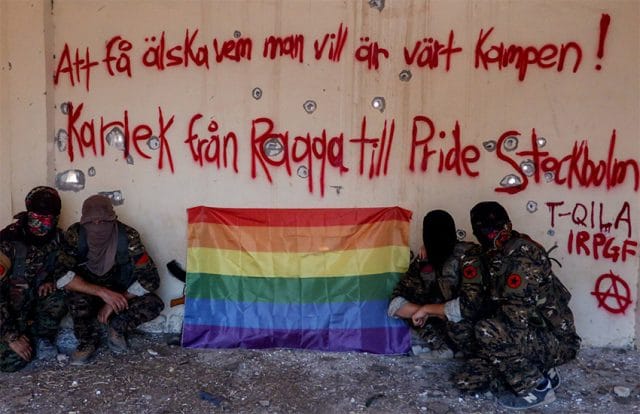 ‘To love whoever you want is worth the struggle!’

A group of guerrilla fighters in ISIS-ravaged Raqqa, Syria have posted a message of support to Stockholm Pride. The festival takes place in the Swedish capital this weekend.

The photo and message was posted on the Facebook page ‘The Women’s Revolution in Rojava’. The page represents Kurdish women fighting against ISIS/Daesh in in the Rojava region of Syria.

The image follows social media postings last week by The Queer Insurrection and Liberation Army, or TQILA [pronounced tequila]. They posted photos of masked guerrilla fighters in Raqqa with a rainbow flag and the message, ‘Faggots kill fascists’.

That group is part of the International Revolutionary People’s Guerilla Forces (IRPGF), an anarchist movement.

It’s believed that the IRPGF is made up of international volunteer fighters, who are fighting alongside the Syrian Democratic Forces (SDF), a Kurdish-Arab coalition attempting to defeat ISIS.

Translated, this says, ‘To love whoever you want is worth the struggle! Love from Raqqa to Stockholm Pride.’ The wall also bears the initials TQILA and IRPGF.

An IRPGF spokesperson said last week that the group was made up of ‘many genders’.

‘TQILA’s members have watched in horror as fascist and extremist forces around the world have attacked the queer community and murdered countless of our community members citing that they are “ill”, “sick” and “unnatural”,’ they said in a statement.

‘The images of gay men being thrown off roofs and stoned to death by Daesh was something we could not idly watch.’

A message on IRPGF’s Twitter feed also featured the Stockholm Pride image and a message of thanks to a Twitter user, @Mexlumy, affiliated with the YPG Media Center – a Middle East-based media agency covering Rojava, Kurdistan Region, Syria, Iraq, Turkey and Iran.

@melumy told GSN he is based in Stockholm. He asked us to use his pseudonym Têkoşîn rather than his real name, as he feared reprisals from ISIS sympathisers in Sweden. He approached IRPGF for the message of support for Stockholm Pride, and that he supported IRPGF and TQILA in their aims ‘100%’.

‘The photo is 100% from Raqqa. I can assure you,’ he said, when asked about the veracity of the image.

It is not known how many people are involved with TQILA, and information about the identities of nationalities of members is not clear. Some volunteers are believed to have travelled from European countries.

GSN has approached the organizers of Stockholm Pride, and YPG Media Center, for comment.