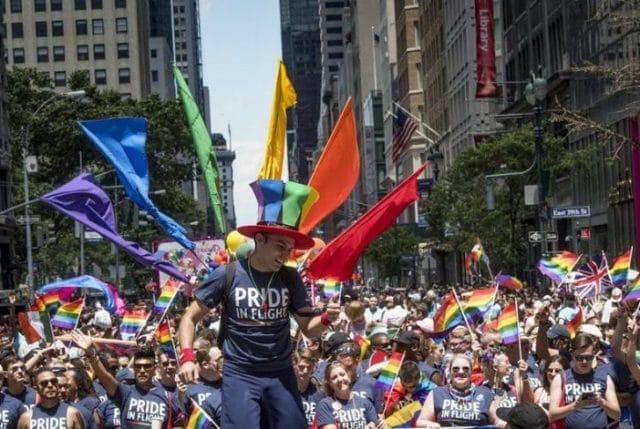 A new poll found that LGBTQ are actually pretty fine with just about anyone showing up at Pride, despite controversies around police officers, kinksters, families, and corporations.

A poll of 801 LGBTQ people conducted by Whitman Insight Strategies and Buzzfeed News found that the community overwhelmingly supports just about everyone going to Pride.

When asked about police officers marching in Pride parades, only 10% of people said “No.” 79% said “yes” and the rest didn’t give an answer.

Over the past several years, queer activists in several cities have protested Pride parades by holding them up, often because of the presence of police officers and corporations. In New York City this year, a separate Pride march is planned for this weekend, free from police presence and corporate floats.

While the survey didn’t ask if people in certain cities cared more, a majority of people across all demographics that were measured – men, women, nonbinary, gay, bi, trans, cis, white, POC, all age groups – said that police should be welcome at Pride.

Keep in mind, though, that the break-outs for various demographic groups in an already small poll are not precise; the margin of error increases as the sample size decreases.

Kinksters have also been the subject of criticism for coming to Pride from gay conservatives like Chadwick Moore. But LGBTQ people remain supportive: only 10% of respondents said that they should not be welcome to participate in Pride, 72% said they should, and the rest had no answer.

Families with children should be welcome too, according to the survey. Only 3% of respondents said they shouldn’t be, while 87% said they should and the rest didn’t answer.

So is anyone not welcome at Pride? Maybe Babadook and Taylor Swift.

When asked who was a queer icon, most respondents agreed that RuPaul (65%) and Ellen (78%) were.

Only 9%, though, agreed that Taylor Swift was a queer icon, just above Babadook (6%), the horror movie character that some people on Twitter joked was gay.