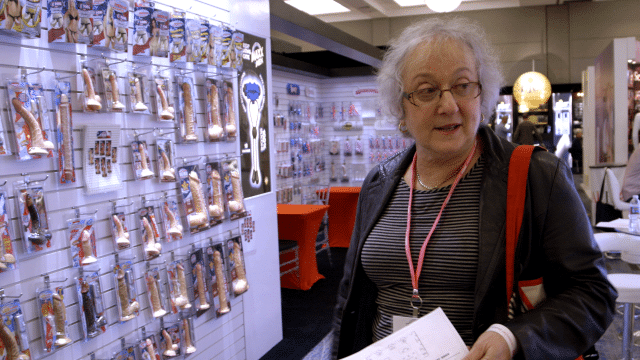 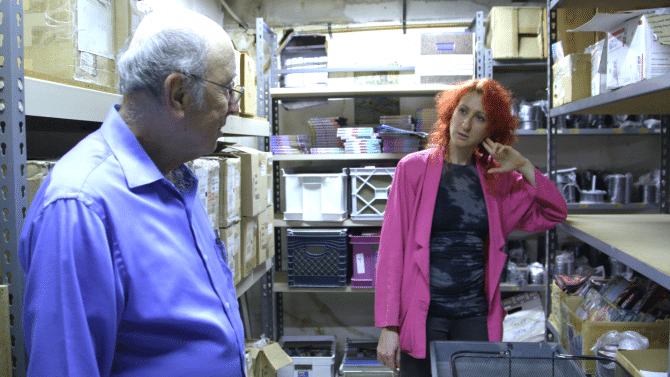 “I’m standing in the $0.99 store. I have a two-year-old that needs supplies for his birthday party tomorrow.”

Rachel Mason doesn’t give herself a break. The noted musician and performance artist has spent the first half of the year traveling the country with her new film Circus of Books. It opens at Outfest July 18 before coming to Netflix this fall.

The documentary traces the history of Mason’s family business, the West Hollywood adult shop of the same name. Mason grew up with her parents, Karen & Barry, running the store staring in 1982. Only as an adult did she begin to understand the merchandise it sold, and its cultural significance to the queer community. As the store shuttered its doors at both Silver Lake and West Hollywood locations earlier this year, Mason released her film to share the history of the establishment, and the profound effect it had on her family.

We tell Mason we’ve been trying to get her for an interview since we caught the film at the Tribeca Film Festival this spring. Amid the background noise, she granted us a few minutes ahead of the July 18 Los Angeles premiere to talk about her family, the film, and how Ryan Murphy came aboard as producer.

I have to say again that great journalism reminds me of things that I had forgotten about. So in 2004, KCRW reporter Matt Holtzman did a radio piece and asked me to dig up the oldest footage I had so he could dive in. That was done in 2004, and I had just taken a queer studies class with Jonathan D. Katz, my professor at Yale. I think I casually mentioned, “I don’t know if this is important to gay history, but my parents own Circus of Books.” And he was like, “Circus of Books? That store was so important to me as a gay man. I practically came out in that store.” He had all these amazing things to say. I’m a total LA kid, you know, the East Cost totally intimidates me. So I was like how do you know about Circus of Books at Yale?

So he was like just go home and film something over the holiday. Document this, because it’s really important history. He said “Queer history is an unwritten history.” We’ve been oppressed. There are no historical archives. This is part of our history.

So when I went back to document my parents, they said, funny enough “Jeff Stryker has just invited us to his little cowboy show in the valley.” 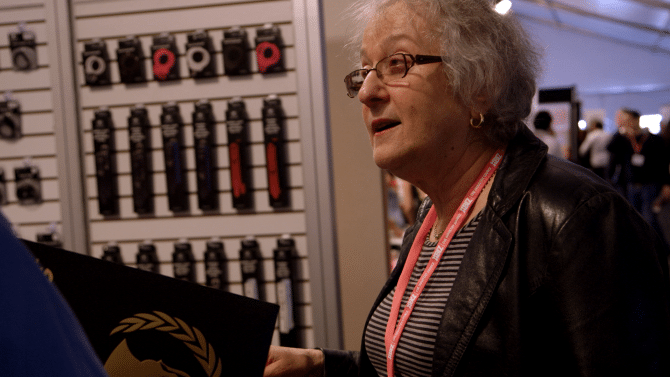 So I thought, why not document that? And it was the most hilarious footage. My parents are so immersed in this world and they’re so used to it that it didn’t phase them at all to watch Jeff Stryker doing all these ridiculously graphic dances to his hit song “Pop You in the Pooper.”

Which is a country line dancing song. But that was the very first footage. None of it made it into the film; it didn’t go anywhere. It wasn’t what I was trying to do. It took when the stores actually started to close in 2014 when my producers, Adam Baran, said “Rachel, you need to document this now. Because it is going to close, and it’ll be gone.” So it was because of this kind of death blow to the store. I also knew nobody else really could [make the film], because my mom—I think other filmmakers approached her—and she was always reticent to let anyone know about the business. So it had to be me.

The funny thing is that my mom’s instant reaction, the whole time—and I had forgotten this until I saw the footage I shot in 2004 again—my mom’s reaction back that was “Look, Rachel, we’re the worst people to talk to about anything within this industry. We don’t know anything. We didn’t start the business. Running it for 35 years means nothing.” My mom, herself is a former journalist, you know, and she was just on my case about “this is not how you do this as a journalist.” Which sort of became the joke of the whole movie. She’s so obviously a world expert on gay porn. She’s seen it all, and she’s exactly the right person to want to talk to, but she doesn’t want to talk.

I’ve been sharing that. That was your interview? I didn’t realize…

That blew my mind. 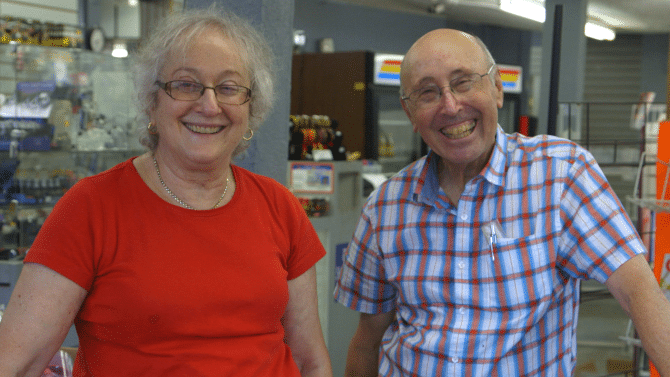 The thing about the store is that every man of John Waters’ generation who was at the store hands down has some crazy story. It’s almost like you can’t not have a crazy story.

The funny thing is there’s a line my dad says in the movie: “Something really crazy would have had to really happen to register it.” And I’m like, what’s more crazy than people having sex in the store? What is really crazy? Someone getting shot? One of the crazy things my dad said was that one time a worker fell through the roof above the store. It sounded like one of those horrific, scary accidents. By some miracle, this guy didn’t get injured. But people were cruising so hard that the dust got kicked up, and people just kept shopping. There was so much crazy activity happening that people were just not even noticing somebody could fall through the ceiling.

Something poignant also came up recently—a person wrote an email to my mom. It said “I’m writing you about your store closing. I’m not gay; my husband would be dead if it weren’t for your store. I want you to know…” she listed the day. “My husband was standing on the corner and a gang attacked and beat him. And because the store was open 24 hours, he somehow managed to crawl to the store and an employee came out and saved his life.”

So I thought about all these other stories…because the store was just there. They were both such hotspots of activity, not just gay activity. People went there as a refuge.

Totally. The store was there in the 60s, which, at that time, being gay was illegal. Another image I have—and this didn’t make it in the film—when the store was closing, I went back to film. This guy wearing a Vietnam Vet had walked in the store with his cane, really elderly guy. He just stood where he walked in, couldn’t move, and started crying right there. And he said “I have the best memories of my entire life right here in this store. I just came here to stand in here one more time. I know it’s the last day. When I got out of the service, this is where I knew I could come.” And that’s like…Vietnam? A gay soldier? Can you imagine?

Totally, and I’m 40, and I was always in a gay circle. So living in West Hollywood I never experienced anything like [living in the closet]. Being an artist, I’m more deep within the gay community. In the 90s, it wasn’t so easy, but nothing like what those people experienced. 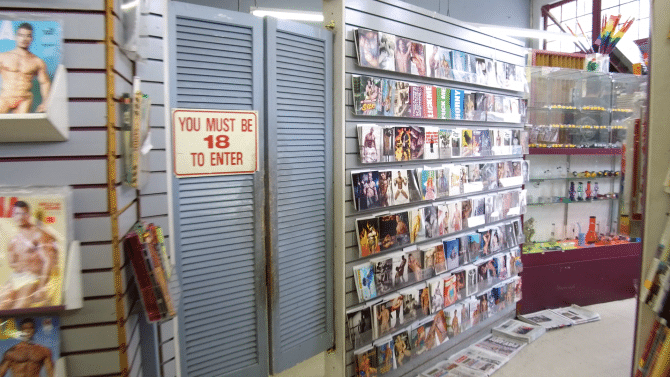 No. I mean, I knew about the store. But my Mom forced me to go to Hebrew school, which I hated. I was just rebelling against her. I thought it was terrible—dogmatic, conservative…all the things my mom was. I was shocked beyond belief when I found out they were doing something cool. It was unreal.

That was really painful for me to realize. I think this is maybe just another avenue of appreciating the differences in gay cultures—plural. I was, in the 90s, my people were doing experimental drag performance art. Body slicing. The people that were on the cutting edge fringe even within the queer world. And I still am. I love all the weirdos. My brother’s just not an artist, not into things that are freaky. I think I was representing to him, if you’re going to be gay, you have to be this fringe person on the edge of society. It was really painful for me to realize that I could have been part of what made it hard for him. He was just such a normal guy. He wanted straight-As, that kind of perfection.

Yes. I do. Funny enough, I’ve identified with as many letters—and I’ve switched across. I’ve thought maybe I’m a lesbian, or bi, or queer. I’m not trans, I am just female. But even to this day I feel like it’s still a work in progress to figure out what all the varieties of letters are. Actually “P,” pansexual, seems a bit more fitting to me. I’m attracted to people who are non-gender conforming. So “queer” makes a lot of sense as a word for me.

I’ve been learning from this festival experience. Both my parents have said different things. My dad is just sort of really on a trip of his own. If everyone could be like him, we’d have a peaceful world. He’s amused. He thinks its great when people tell him their stories. He’s very touched.

My mom, on the other hand, is extremely conflicted. She feels like she’s been hurled out of this safe space herself, and is now a public figure. She’s getting used to it. She’s not upset, but it’s been a struggle for her because she, I think, held up an image of who she was, and what she wanted to project. She says in the movie “I never thought of myself as a soccer mom.” And I’m like that’s who you were. You were a soccer mom. She wanted to be a perfect, Jewish, classic mom. I think it’s so strange to her. Whenever people clap, she doesn’t understand why they’re clapping. She’s like we really don’t deserve this. We’re not heroes. And she’s very aware of queer history because of PFLAG. So she says “There are real heroes, and we ain’t them. They’re people that laid down in the middle of the street.” I’ve had enough people try to redirect her to say “The people that were there running the store were heroes also.”

When you close a store, there’s a ton of stuff to do. So they have to manage things to do with the building, paperwork. Every time I talk to my mom, she’s inundated with paperwork. But they are trying to be supportive of the festivals, going around wherever they’re asked. 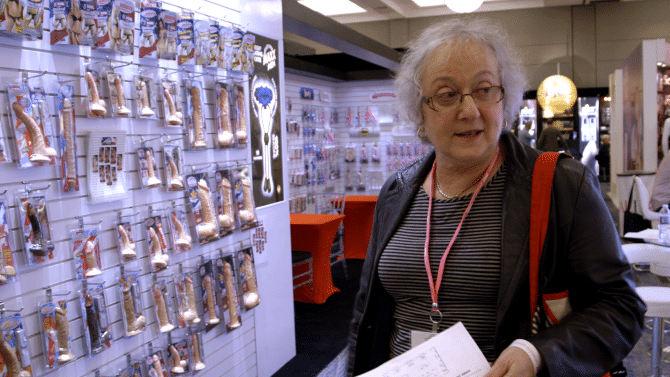 It was a bit of a blur. I was so stressed, I didn’t absorb the good news really. Everything happening at that point was like a bomb dropping on me. Thta happens with every film; there’s so much stuff. So when that happened I was like, I’m going to believe this when I see him, when I meet him. And I met him, and I believed it. He was cool. And he told me that he really loved the movie, the story. He had been in the store itself. That meant a lot to me—someone who came to LA as a gay man himself in the era when the store was in its heyday. So he was the right person for the film.

Circus of Books opens Outfest July 17. It comes to Netflix this fall.