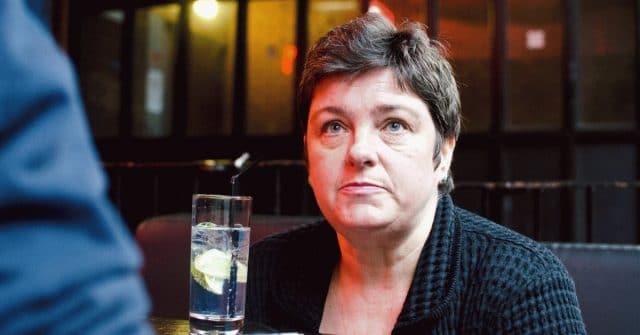 Radical feminist Julie Bindel claimed that she was “physically attacked” by a transgender woman after speaking at an event at Edinburgh University on Wednesday (June 5).

Bindel wrote on Twitter: “I took part in a really brilliant event tonight at Edinburgh University, speaking about women’s sex-based rights. I was physically attacked as I left the event for the airport. This kind of intimidation has to stop. The person that attacked me was a man.”

The person referred to is Cathy Brennan, a trans woman misgendered as “a man” by Bindel, who claims she “lost her s**t” but that she did not touch Bindel. Bindel later told The Scotsman that she was “almost” punched.

“The truth of the matter is that I did not raise a fist. I attempted to push past security so speak face to face with a person who has caused great harm to trans people across this country,” wrote Brennan on Twitter.

Cathy Brennan said she “did not raise a fist” at Julie Bindel. (TownTattle/ Twitter)

Verdi Wilson, who attended the event, told PinkNews: “The chair mentioned that a couple of speakers would have to leave just before 7pm as they had a flight to catch. Rosa Freedman and Julie Bindel left together about five or 10 minutes before the meeting ended.”

Freedman, who also spoke at the event, tweeted that Bindel had been “violently attacked” but later confirmed that Bindel was “not physically hurt.”

The event was a panel discussion on “women’s sex-based rights.” The event page for the panel states that they planned to discuss “future ways forward for women’s rights in a world of complex sex and gender relations.”

Staff and students at Edinburgh University protested against the talk taking place, branding it “transphobic,” amassing more than 1,300 signatures on a petition against the event, holding a silent protest outside and organising a rally for later in the evening.

“Our view is that there is misinformation, misunderstanding, and fear-mongering presenting cisgender women’s rights as being opposed to trans and non-binary people’s rights,” said the school of social and political science student and staff collective who created the petition.

The Edinburgh University staff Pride network also spoke out against the event, and every member of the network’s committee has now resigned, claiming that the university censored their opposition.

Jonathan MacBride, co-chair of the network, told PinkNews: “Instead of supporting us, supporting our position, they chose to censor us, saying in future we had to ask permission before taking a stand on anything.”

He said of the silent protest: “Staff and students came together beforehand to give each other strength and to make placards and badges. The solidarity was a strong message of staff and students together, protesting an unbalanced, one-sided event.”

Labour MP Diane Abbott, who has previously been vocal about her support of the LGBT+ community, replied to Bindel’s tweet about the alleged attack saying: “Horrible. Hope you are now OK.”

Abbott has been receiving criticism from her followers for supporting Bindel, but when asked to comment by PinkNews Labour’s Shadow Home Secretary said, “I asked Julie Bindel if she was OK after she said she had been physically attacked.”

Bindel defended Abbott in another tweet which said: “Can you do me a favour? Those of you having a go at Diane Abbott about trans stuff, please lay off? She has had enough abuse over the years, and much as you disagree with her about stuff, I don’t want anyone harassing her in my name,” to which Abbott replied: “Thanks Julie.”

An Edinburgh University spokesperson said: “An incident occurred after last night’s event. Our security staff acted swiftly and professionally to ensure that no one was harmed and the event concluded peacefully.”

When asked to comment, Bindel declined to say whether she had filed a police report against Brennan but told PinkNews: “I despise your woman-hating, anti-lesbian rag, and would rather give Donald Trump a massage than speak to you.”

Bindel subsequently claimed on Twitter that PinkNews was “more-or-less calling me a liar” after reaching out to her for the purposes of journalistic fact-checking and to offer a right of reply.