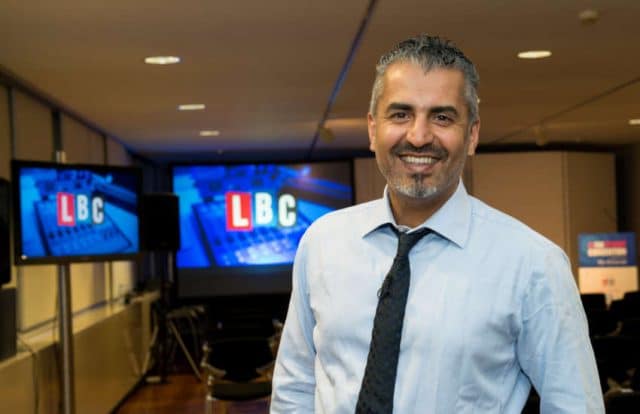 According to the avid listener, teaching kids about LGBTI issues in schools is like teaching them it’s OK to beat your wife.

But as soon as Nawaz heard the caller spout his ridiculous theory, he hung up on him.

‘When you teach a kid about a behavior,’ Joe, the caller said. ‘Because being gay is a behaviour. It’s not like being black.

‘It’s not having a culture, it’s a behavior, it’s as if the school decided to start teaching kids that it’s OK to beat your wife,’ Joe said.

Nawaz cut him off completely and shared this important message.

‘Are you serious?’ he asked. ‘Are you that illogical that you can not see the distinction between a physical assault and a sexual behaviour with consent with another person?

Nawaz then added: ‘You just decided it was OK to make the comparison and say that teaching somebody in school that gay people exist would be like teaching them it’s OK to beat your wife.

‘And you think that’s just going to wash?

‘You think people are that stupid that they will follow your trial of thought after that statement? Unbelievable,’ he said.

During his show, he also urged British Muslims protesting against LGBTI-inclusive education to think again. He even implored them to join local Pride celebrations in Birmingham this year.

His message to the Muslims protesting outside of Moffat’s school was simple: ‘They’re on the wrong side of history.’