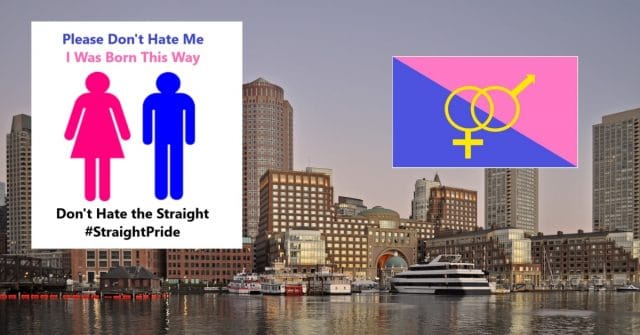 Trump supporters in Boston, Massachusetts, are seeking a permit to hold a ‘Straight Pride’ parade.

The city is reportedly set to host the Straight Pride parade in August, after a request was filed with City Hall.

The parade website claims: “Straight people are an oppressed majority. We will fight for the right of straights everywhere to express pride in themselves without fear of judgement and hate.”

Boston Straight Pride organisers are demanding “the same parade route as the Boston Pride Parade [and] the same accommodations given for the LGBTQ+ parade,” including street closures and permission for parade floats.

The group have designed their own flags and logos, featuring male and female symbols, ahead of the march.

The organisers also named the actor Brad Pitt as their “mascot” for the march, adding: “Brad is an accomplished actor, film producer, and mascot. He is a hero to straight men all around the world.”

The group named actor Brad Pitt as their ‘mascot’ for the Straight Pride march.

Brad Pitt has no association with the group.

The website specifies that all are welcome at the event except “Antifa,” a reference to anti-fascism protesters.

Mark Sahady of right-wing group Resist Marxism is one of the organisers behind the march, alongside pro-Trump Republicans John Hugo and Chris Bartley.

In a Facebook post, Sahady claimed: “It looks like the Boston Straight Pride Parade will happen. We filed a discrimination complaint and it appears the City of Boston understands they would lose in litigation.

“The city is now working with us on the parade. We will have the streets closed and be allowed floats and vehicles.

“The tentative date is 8/31 but will be finalised in the next few weeks. If you would like to come as an individual, march as a group, or bring a float or vehicle, then get in touch.

“This is our chance to have a patriotic parade in Boston as we celebrate straight pride.”

Mark Sahady claims the march will go ahead.

The same activists previously sought the right to fly a straight pride flag from the flag poles at Boston City Hall. Their request was denied by the city’s Democratic mayor, Marty Walsh.

Despite Sahady’s suggestion that permission has been granted for the march, the city did not confirm the event would go ahead.

Mayor of Boston Marty Walsh clarified in a statement: “The group planning to host Boston’s ‘Straight Pride’ parade has been in contact with the City of Boston, but has not yet received the necessary permits to host a parade.

It’s not the first attempt to host a Straight Pride event, though most previous efforts have failed to garner more than 10 attendees.