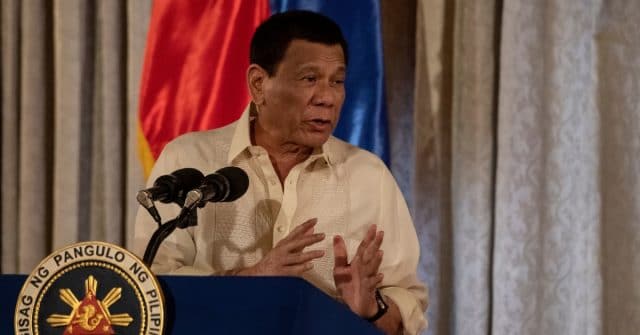 Rodrigo Duterte’s spokesman has said that LGBT people shouldn’t be offended by the Philippine president’s claim to have “cured” himself of homosexuality.

Duterte claimed that he “used to be gay” but “was able to cure” himself during a meeting with Filipino community members in Japan on May 30, sparking widespread criticism.

In response, the president’s spokesman Salvador Panelo has since said that the LGBT community “should be happy.”

“I don’t know if it should offend them,” Panelo told publications including the Philippine Daily Inquirer on Tuesday (June 4). “Why is the gay community offended?”

“The remarks meant he had changed his sexual preference, what’s wrong [with that]?”

Duterte’s words were widely construed as a misdirected attempt at humour.

“It’s as if there’s a need to ‘pray the gay away’ and that homosexuality is a disease that needs to be cured.”

Duterte made his comments while asking an audience whether they thought his political opponent, Senator Antonio Trillanes, could be gay, echoing previous attempts to use homosexuality as a smear.

In April, he said that rival politician Florin Hilbay had “filled his office with homosexuals” while serving as solicitor general.

“He acts like a man and pretends that [his partner] Agot is his girlfriend,” Duterte said.

“Be true to yourself. You’re gay. Don’t hide behind a cover.”

Back in 2016, Duterte called the US ambassador to the Philippines a “gay son of a bitch,” prompting then-President Barack Obama to cancel a planned meeting.

Since becoming president in 2016, Duterte has flip-flopped on LGBT+ rights

During his election campaign he said that marriage was for“Adam, Eve and the gays,” but reversed his stance upon taking office.

But as of June 2018, Duterte has publicly backed same-sex unions, promising to change the law on marriage equality.

Currently there are no legal protections for LGBT+ people at a national level in the Philippines, and there is no legal recognition of same-sex relationships.