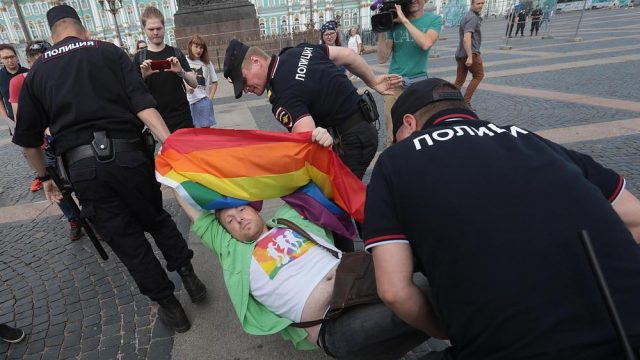 Russian police detained as many as 30 gay rights activists who took part in an unsanctioned rally in St Petersburg on Saturday.

A few dozen activists had gathered at Palace Square in defiance of a ban. City authorities had turned down their request to hold a parade so each participant demonstrated alone, in a bid to avoid the protest being called a gathering,

One activist, who gave her name as Sobi, said: ”I am very tired of the discrimination and the thought that I’m not allowed to walk out and say I feel bad about it. My country doesn’t want to hear that I feel bad, it doesn’t care.”

Police detained campaigners who unfurled rainbow flags or held placards, dragging them into a police bus.

Homosexuality was considered a crime in Russia until 1993. In 2013 Russia passed a law banning the spread of so-called gay “propaganda”.