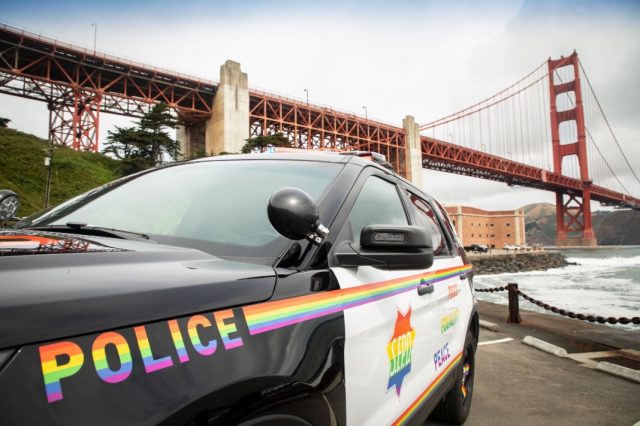 The SFPD is the first law enforcement agency in the US to introduce the patches, which are rainbow-patterned versions of the department’s signature blue and gold patch. Officers are encouraged (but not required) to wear them on their shoulders for the month of June.

The patches are available to buy for $20, and all funds will be donated to Larkin Street Youth Services, a local charity that supports LGBT+ people.

The rainbow patrol vehicle will be used for recruitment and community engagement events.

The SFPD wrote on Facebook: “SFPD strives to be a diverse department and has officers out at almost every rank. We want to encourage positive conversations with LGBTQ communities and the Pride Patch symbolizes our inclusiveness.”

The initiative was praised by many on Twitter, including @GregMiraglia who wrote: “Bravo SFPD and Officer Mikael Petooya for this brilliant idea and gorgeous patch design. This is a visible demonstration of Pride a commitment to the community.”

However, others have raised issue with the SFPD’s involvement in Pride, particularly in light of this year’s San Francisco Pride theme, “Generations of Resistance,” which commemorates the 50th anniversary of the Stonewall uprising.

The rainbow patches are on sale for charity (@1YCEU/Twitter)

While @bennynogood added: “#stonewallwasariot We have Pride Month because trans women threw bricks at cops. Please don’t. This is gross.”

Elsewhere in the US, other cities are also gearing up for Pride month, with Madonna recently confirming rumours she would be performing at World Pride in New York.

Chicago introduced rainbow-coloured pedestrian crossings, while the pylons at Los Angeles International Airport were lit up in rainbow colours.