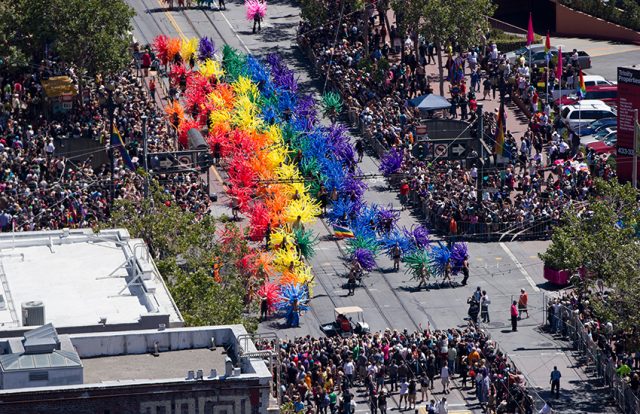 A number of LGBTI rights activists and former Google employees have petitioned to the Pride organizers to ban the company from this year’s Pride because of inaction in addressing online homophobia.

Google has come under widespread scrutiny regarding its policies regarding homophobia on its video streaming site, YouTube.

Openly gay journalist Carlos Maza has called out the site for failing to address homophobic slurs directed at him by right-wing social commentator, Stephen Crowder.

Calls for Google to be excluded from this year’s Pride parade were heard at a packed open meeting which took place Friday (7 June).

A number of attendees at the meeting were former Google employees and called on the Pride Board to take action against the company, .

‘This feels like a classic example of “rainbow-washing”,’ said activist and former Google employee Tyler Bresaicher.

Another former employee who wished to remain anonymous added: ‘[Google] gets a lot of press for being progressive […] But even during Pride Month, this is how they behave.’

While Pride organizers have said that Google will remain a participant unless the board decides otherwise, they are ‘monitoring’ the situation.

‘We are monitoring this story as it develops, listening to the concerns of the community, and have raised these concerns with our contacts at Google,’ an SF Pride spokesperson said.

YouTube has been met with widespread backlash due to their inaction over Crowder’s online behavior.

The right-wing commentator has repeatedly described Maza as a ‘lispy queer’, ‘gay Mexican’ and a ‘little queer’. Crowder also uses his channel to sell merchandise with ‘Socialism is for f*gs’ printed on it.

YouTube initially said they would not take action against Crowder as his use of slurs did not violate the terms of use.

Countless LGBTI rights supporters lambasted the site for continuing to give a platform to Crowder. Many have noted that the site is allowing the publication of homophobic slurs while publically expressing support for this year’s Pride Month.

There have also been reports of numerous Google employees angered by the company’s decision.

The tech firm later backtracked on their decision, largely due to the public outcry. While the move has been welcomed by some, many LGBTI rights supporters have said this does not do enough and maintain Crowder should be banned from entirely.

However, a number of people have expressed support for Crowder, saying that any attempts to block or demonetize his platform would be a form of censorship.