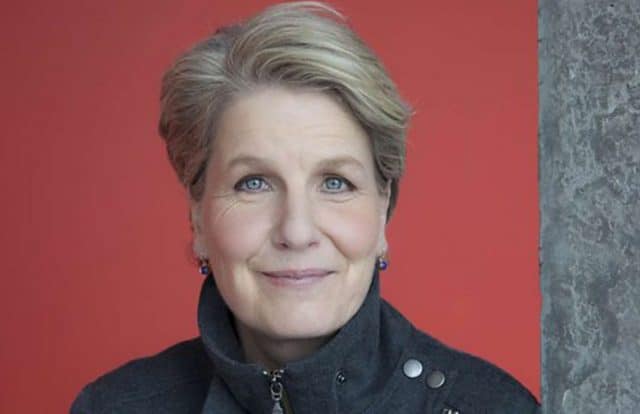 Great British Bake Off presenter Sandi Toksvig has shed a light on the #MeToo movement and sexual harassment in comedy.

Gillard, who served as PM from 2010 to 2013, and Toksvig had a chat for a new podcast series, A Podcast of One’s Own. Gillard hosts the podcast in her role as Chair of the Global Institute for Women’s Leadership at King’s College London.

Toksvig, who’s openly gay, was the first female guest on the show.

The presenter has discussed her experience of forging a career as a leading female comedy figure in a male-dominated industry.

Gillard and Toksvig discuss a range of issues, from unequal treatment at school – Gillard was made to study laundry, sewing and cooking – to sexual harassment of women comedians.

Toksvig recalled her fight against sexism began at a very young age.

‘At school, I led a strike when I was six because I thought the boys had been allowed out to play in the rain and the girls hadn’t.’

She also pointed out how her the difference in her parents’ roles made an early impression on her. Her father worked as a journalist and was often out of the house, whereas her mother was a housewife.

‘I remember watching my father going off to work and watching what my mother did, and thinking, “There she is in the house – that looks really rubbish. I don’t want to do what she’s doing.”‘

Making a break in comedy as a woman wasn’t easy either.

‘In the first major comedy club in London, there wasn’t even a toilet, just a sink in the corner of the dressing room. It had never occurred to them that a woman might turn up … I had to queue with the public.’

She described the sexist jeers and lewd remarks to which she was subjected from audiences, as well as male colleagues, and the sexual harassment her peers had to put up with or see their careers sink.

‘I witnessed enough young women whose careers were either going to be promoted or not promoted because they would or would not put up with certain behaviours… we lost a lot of great early talent.’

Toksvig admitted she’s never been sexually harassed but she had witnessed several young comediennes’ careers depending on ‘whether they’d put up with certain behaviors’.

‘In a weird way, being lesbian sort of protected me,’ she also said.

The presenter also acknowledged that progress has been made since then, but questions whether the #MeToo campaign has had enough impact.

‘A woman gets slapped on the bum once too often and the boys just go, “Can’t you take a joke?”‘

‘The “Can’t you take a joke?” part is just tiring,’ she continued.

A lifelong campaigner for LGBTI rights including gay marriage, Toksvig talks to Gillard about the challenges she faced as a result of her sexuality.

She was almost thrown out of her university college upon finding out she was having a relationship with a woman.

‘When I was in Cambridge there was no LGBTI society,’ she said.

‘They only allowed me to stay because of my excellent academic record,’ she continued.

‘So if you’re gonna be gay, be smart about it.’

She also said that Cambridge will give her a fellowship this year to say sorry.

Toksvig publicly came out in 1994.

‘I was unaware of another lesbian in British public life…people wanted to kill me, I had to have police protection,’ she recalled.

Yet on LGBTI rights, she believes great progress has been made and newer generations are more open about gender and sexuality.

‘It’s happened so dramatically and so thrillingly and that is why I continue to believe in great change,’ she said.

Toksvig’s next project is to take on Wikipedia to rectify the stark gender imbalance in content. She has the support of Wikipedia’s co-founder Jimmy Wales.

Just 9% of entries, in fact, are about women and their achievements, compared with 90% of posts about men.

The writer plans to pen a new show about women and their achievements and to take it around the world. She plans on asking audience members to join her campaign to ‘feminize’ Wikipedia.

‘I want to get every single member of the audience to commit to adopting one woman and making sure her entry on Wikipedia is correct or to inputting someone new,’ she said.

Last year,  was the keynote speaker for the event. She pointed out that although we’ve come a long way in terms of rights there ‘was still a long way to go’.

The annual LGBTI Founders Day focused on gay, lesbian, bi and trans icons over 50 and their victories as well as their struggles.

Watch her speech in full below