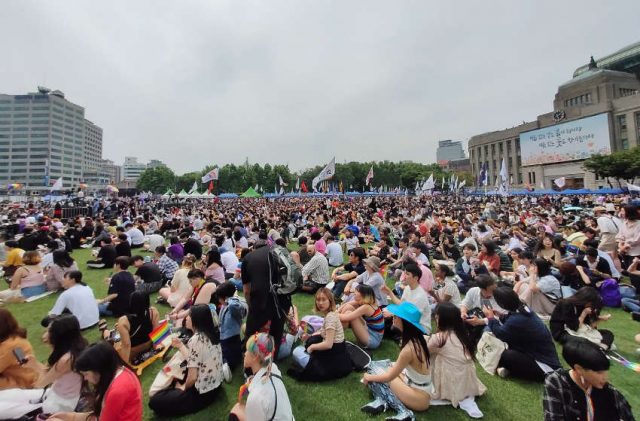 The first day of the Seoul Queer Culture Festival (SQCF) has kicked off in South Korea’s capital on Saturday (1 June).

It follows on from Seoul Pink Dot which took place in the capital city the night before.

However, the annual event has been met by counter-protests by local Christian groups.

In recent weeks, religious groups took legal action in an attempt to block the Pride event.

Posting on social media show the packed event going peacefully, though Christian groups had made their presence known.

In a Twitter thread, @koryodynasty posted a video from Seoul Plaza, writing: ‘The usual homophobic “Christians” are blasting their prayers into the square as expected.’

The Twitter user also posted photos of the crowds attending the Pride event.

The Pride event follows on from Seoul’s Pink Dot

The event takes inspiration from Pink Dot which originated in Singapore.

Seoul’s event saw thousands of participants light up Seoul Plaza in pink on Friday night (31 May).

SQCF’s organizers would have been anticipating counter demonstrations from Christian groups.

Earlier this week, a court dismissed a case by Christian groups demanding that SQCF be called off.

The groups had claimed that the event would be harmful to children and infringed on their rights.

A high number of police and security personnel have been mobilized to keep order during the two days of SQCF.

Pride events in Busan and Jeju were also interrupted by anti-LGBTI protestors.

According to attendees of Jeju Pride, demonstrations grabbed attendees and lay in the street to prevent the march. In Busan, police had to keep the pro- and anti-LGBTI marchers apart.

Homosexuality is legal in South Korea. However, there are no laws protecting against discrimination, and conservative attitudes often mean many Koreans remain closeted.

Same-sex marriage is also not legal, with polls suggesting .

In the past, rights groups have spoken out against the country’s leaders for not doing enough to protect the LGBTI population. to