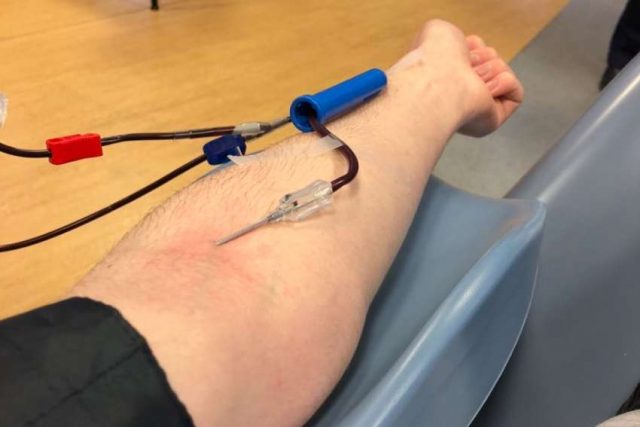 When Britain’s National Health Service (NHS) called for more men to donate blood, gay and bisexual men responded in outrage. But some HIV advocates argued the anger was misplaced.

During the National Blood Week, the NHS said it needed 950 more men to become donors this year. It also said fewer than 50% of all donors were men.

‘We’re incredibly grateful to all our female donors, who are vital in providing life-saving blood to those in need,’ said Mike Stredder, director of Blood Donation at the NHS Blood and Transport.

‘But we need men to catch up with recent recruitment because their blood can have different characteristics which can make it important in certain situations.’

Men who have sex with men (MSM) responded in outrage to the call. Many want to donate but are prevented from doing so in what they describe as homophobic, antiquated laws.

London based gay man, James Roebuck had always wanted to donate blood. So in March last year, he abstained from sex and managed to donate.

He described the experience as ‘erasing a part’ of himself.

‘The nurses I even spoke to agreed that it was wrong that such rules were in place,’ he told Gay Star News.

‘You never have to explicitly say what your sexuality is, however, there’s a box that says “had oral or penetrative sex with with another male in past three months? Y/N”.

‘I ticked “N” But it did feel like in the process I was erasing a part of myself and agreeing to something I do not think is right.’

The UK is one of 19 countries which has a deferral policy for MSM. In some countries that deferral period can be up to 12 months.

Some countries, like Australia, completely ban MSM from donating at all. In the US alone, deferral policies leads to missing out on 615,000 pints of blood and could save about 1.8 million lives.

Governments introduced blood bans at the height of the AIDS epidemic. Some countries later relaxed them to deferral policies, but people say they are discriminatory.

A growing movement calls for those laws to be scrapped and allow men to donate blood. The US Blood Equality initiative says they ‘reinforce negative stereotypes about gay and bisexual people—particularly that AIDS and HIV is a “gay disease”.’

‘It supports the false perception that heterosexual people are at low risk for HIV infection, while allowing individuals who participate in high-risk behavior, but who do not identify as gay or bisexual, to donate blood. This doesn’t make sense,’ the groups says.

‘These restrictions may have made sense when first enforced in the 1980s at a time when HIV was primarily affecting gay and bisexual men in the west and when HIV testing methods were less accurate,’ he said.

‘But long ago HIV ceased to be allied to any particular sexual orientation and the testing of donated blood is now very exhaustive and accurate.

‘It is absurd that medically needless restrictions preventing so many gay and bisexual men from donating blood are in place across so many countries.

‘We need to stop stereotyping and marginalising the gay and bisexual communities and start securing more blood to save more lives. Let’s start screening sexual behaviour and the blood, not the sexuality.’

But Nic Holas, a HIV activist and co-founder of HIV peer support group The Institute of Many (TIM), believes we need to end HIV in order to achieve blood equality.

‘I think it’s important to say that I understand the frustration some people have with the blood deferral – it’s discriminatory.

Holas also argued the ongoing calls for blood equality can lead to more discrimination of people living with HIV (PLHIV).

‘I do think though that lurking beneath the “blood equality” movement is the further marginalisation and stigmatization of PLHIV,’ he said.

He argued that sends a negative message to PLHIV. Holas wished those ‘up in arms’ over blood equality did more to help end HIV.

‘When that happens, the deferral policy would have no basis.

‘While some are concerned about this ‘discrimination’, Stigma continues to drive PLHIV into dark corners. Imagine a world where we fight to end that.’

The debate around equality has shifted again this year. Mounting evidence has proved Known as U=U, researchers have looked into whether undetectable PLHIV can transmit HIV through donations.

In it researchers found that a transfusion of more than 5ml of plasma from someone with a viral load of 199 copies per ml (i.e undetectable levels) or higher could lead to HIV transmission.

‘This is because the quantity of fluid is greater, and the method of transfer is more efficient, than you would ever get from sexual exposure,’ said National AIDS Map (NAM) executive director, Matthew Hodson.

‘There is a risk that someone who is aware of their status, knows that they are undetectable and believes that there is no possibility of transmission could attempt to donate blood.

‘Dealing with these donations and keeping them out of the blood supply puts an unnecessary additional strain on blood donation services.’

Hodson said he hears ‘the cries of frustration that gay men in long-term monogamous relationships are barred from donating blood’. But he does not believe the deferral policy is homophobic.

‘I’m not slow to call out homophobia when I see it,’ he said.

‘A lifetime ban on gay men donating blood, or even an expectation of no sex for a year, was unjustifiable.

‘However, I do not believe the three-month policy to be homophobic.

‘I have spent many hours with HIV-positive people who acquired the virus because a condom failed or because a supposedly monogamous relationship turned out not to be.’