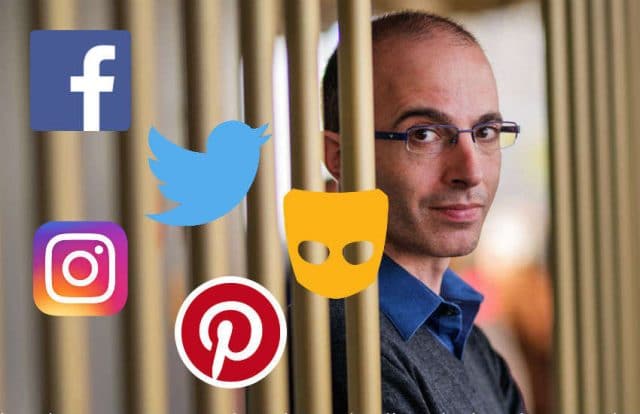 Twitter getting you down? Fed up with Facebook? Irate with Insta? You’re not the only one who thinks social media can be a real pain.

One leading expert says social media has changed what it means to be a young person struggling with sexual identity.

Best selling author, philosopher and historian, Yuval Noah Harari, has been talking about this very modern issue the first National Conference for Israel’s LGBTI Community, on Tuesday in Tel Aviv.

The conference comes ahead of the Middle East’s largest gay pride parade in the city this Friday.

Harari noted that social media can be an essential lifeline for gay, lesbian, bisexual, and transgender people who live outside of liberal bubbles like Tel Aviv, the .

But the bestselling author of Sapiens warned there is also a dark side to social media. He said it can be used for government surveillance, manipulation, and control.

‘All of the online world has done some wonderful things, like enabling people who have no immediate community to be part of something,’ Harari said after the panel session with musician Ivri Lider and journalist Ilana Dayan.

‘When I grew up [in Kiryat Ata, near Haifa], there was nowhere I could go, no one I could meet.’

Harari, met his husband of 17 years on one of the first gay online dating websites, called CheckMeOut. This was a long-defunct website that predated the popular gay meet-up app Grindr, the paper said.

The fight for gay rights is different from other social struggles, such as black activists fighting against racism, Harari said.

Because LGBT people are usually not born into gay families, they must first overcome a sense of isolation, Harari said. They also must make a community for themselves and win family support, before joining the public struggle.

Social media helps diminish this isolation by providing a tool for people on their personal journeys to start reaching out and finding allies and like-minded people, he said.

But using technology to build these bridges also has a dark side.

“[Social media and the internet] also means that LGBTI people are extremely vulnerable to surveillance and abuse,” Harari said.

‘I just read an article about Christian fundamentalist groups who are targeting LGBTI teenagers with advertisements for conversion therapies, which basically play on their insecurities.

‘They target people using the Facebook algorithm, so you don’t even have to identify as gay, it’s enough if you clicked on some gay related news issues or stories and they target you.’

‘In Egypt, there was a case where the police used Grindr to arrest people’, Harari said.

‘You have more and more regimes today around the world which target LGBT people. With the new technologies coming along, the danger is that as the political climate worsens, there is no way you can even hide.’

‘The option that once existed, to hide yourself in the closet, had some terrible consequences, because it meant that people did not fight against the oppressive system, but at least it was a survival mechanism on a personal level,’ Harari added.

‘In the future, there might not be any option of going back to the closet because the technology makes the closet completely transparent.’

Tel Aviv is in the midst of its 2019 Pride Week celebrations. This Friday’s parade is expected to attracted 200,000 people, the Times said.

Friday’s march will wind through the streets and on to a beach and party, complete with party floats and DJs.