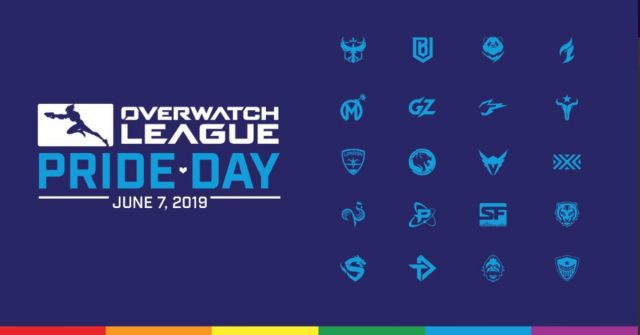 Few, if any, esports organizations eclipse the Overwatch League in both supporting the LGBTQ community within its fan base and giving them visibility. The young league was quick to do so, promoting a Pride Day during its first season in 2018. That tradition continued this year as the league held its 2019 Pride Day on Friday, June 7, but not all fans got the full experience.

According to Kotaku, the South Korean OWL broadcast purposefully avoided any reference to the Pride Day festivities, both visual and verbal. The majority of viewers were flooded with an audience clad in the colors of various pride flags, touting signs with pro-LGBTQ slogans like “Bi Pride,” “Play of the Gay” and “Gays into the iris” that play off of the game’s terminology.

Announcers donned rainbow armbands as they welcomed viewers to the Pride Day festivities, explicitly referring to Friday’s broadcast as one “celebrating the mutual support between the Overwatch League and the LGBTQ community.”

“The Overwatch League prides itself on welcoming fans from all walks of life regardless of background or lifestyle. Today, we want to take a moment to acknowledge some of the biggest fans in the LGBTQ community,” said OWL announcer Chris Puckett.

“You’re definitely welcome here in this space, and if no one else will talk to you, I’ll talk to you.” – @parralex0889

But fans watching in South Korea didn’t see or hear any of that. Instead, they saw a much more straight-forward broadcast, highlighting the matches with minimal reference to the day’s festivities.

“Our Korean partners were aware of the event that [was hosted] in the arena and were allowed to make whatever decision they felt was appropriate for their broadcast… we gave the regional leads and their broadcast partners the autonomy to present their portion of the program as they felt best,” said the insider.

This Pride Day, #OWL2019 is celebrating our LGBTQ+ community.

OWL’s commitment to LGBTQ support and visibility is something born from the game itself. The game features multiple characters that identify as LGBTQ (Tracer, Soldier 76) and others that have been adopted by the community as empowering mascots (Zarya, Hanzo). The league also features at least one out gay player, the Houston Outlaws’ Austin “Muma” Wilmot, and has made commendable efforts to crack down on homophobic and transphobic language within its organization.

All of that feeds into what OWL’s Pride Day is meant to represent. Its great that the league supported pro-LGBTQ groups and charities like the Trevor Project, but those close to the league believe that any supportive message only goes as far as your willing to push cultural boundaries.

“I think the message of Pride is, ‘Hey, you are not alone. Nothing is wrong with you. You are welcome here.’ It is for all those people who are told otherwise. People who doubt their own feelings and thoughts,” said the insider. “To say it to only America or EU doesn’t help that kid in Korea or China. A leader stands up. Either Blizzard is [a] leader on this subject or it is cheap marketing.”