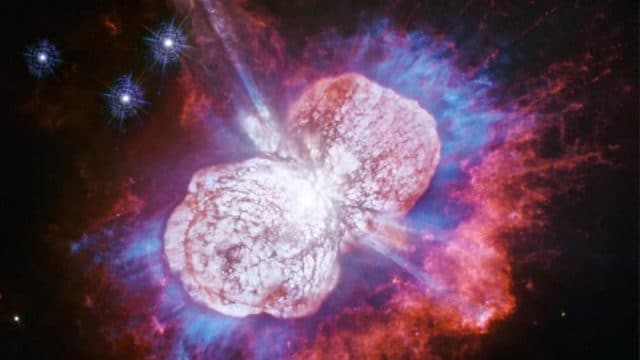 Like the United States of America, the universe has been celebrating its own existence with fireworks since its beginning — the Big Bang, in the universe’s case. Now, 243 years after the U.S. came into existence and 13.8 billion years after the universe did, NASA researchers have discovered a distant star system exploding in festive red, white and blue light, roughly 5 million times brighter than Earth’s sun.

In a gorgeous new ultraviolet photo taken by the Hubble Space Telescope, twin bulbs of light explode out of a gargantuan star system called Eta Carinae. Located about 7,500 light-years from the U.S., Eta Carinae actually consists of a pair of stars, one roughly 50 times the mass of the sun and the other as much as 250 times more massive. They have been blowing their tops for about 170 years.

This picturesque eruption of gas and dust began in about 1837, when astronomers noticed that Eta Carinae had grown significantly brighter overnight. This was the start of an 18-year period known as the Great Eruption, during which Eta Carinae briefly became one of the brightest objects in the sky.

Astronomers still don’t know what sparked the fireworks (one compelling theory: Eta Carinae started as a three-star system, but the biggest star of the bunch swallowed up one of the others and punted the third one into space). But thanks to Hubble’s observations, scientists do know what some of that gas is made of. In the image above, a red halo of hot nitrogen gas streaks away from the nebula’s twin bulbs of dust. Where there should be an empty cavity of space signifying the end of the Great Eruption, a blue ring of warm magnesium streaks into space closely behind the nitrogen.

This vast magnesium ring was detected for the first time in Hubble’s latest observations of the distant nebula. This second ring of hot gas exists where there should be an empty swath of space; its unexpected presence reveals that the Great Eruption may have been even greater than previously believed, said Nathan Smith, an astronomer at Steward Observatory at the University of Arizona.

“This extra material is fast, and it ‘ups the ante’ in terms of the total energy for an already powerful stellar blast,” Smith said in a NASA statement.

Studying the gassy debris ejected by Eta Carinae will give astronomers a better idea of what the Great Eruption looked like, maybe even hinting at what caused that event in the first place. The clock is ticking, as Eta Carinae will probably erupt again within the next million years, this time in a devastating supernova explosion. With the Great Eruption moniker already taken, astronomers will have to get creative when naming that epic show of cosmic fireworks.