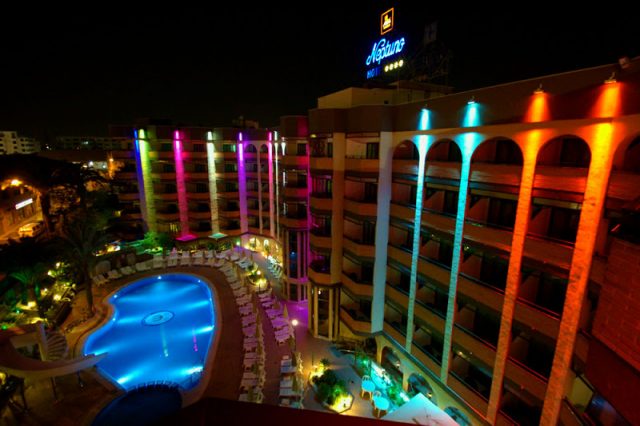 Known for its black lava and white sand beaches, clear waters, and stunning ocean views, Gran Canaria in Spain’s Canary Islands is one of the world’s top gay travel destinations.

But apparently one man and his girlfriend didn’t get that memo when they booked a stay at the Hotel Neptuno, an “adults only” resort that prides itself on having a no-kids policy (“you won’t find lots of children by the pool or running around while you’re trying to relax,” the website reads), its “long tradition of welcoming tourists to the island,” its close proximity to the gay bars, and its impressive outdoor rainbow lights.

In a TripAdvisor review titled “Food was brilliant but made to feel uncomfortable by the gays”, user MooSmith21 writes about his experience at the hotel. It all started earlier this month when he and his girlfriend went on their first holiday together, which they were very excited about.

Upon checking into the hotel, MooSmith21 says, “we were made to feel very welcome by the staff.” The couple was also impressed with the hotel’s food, which he says was a “highlight.” They ate breakfast there every morning, and dined there almost every night.

But everything was ruined when the couple started noticing gay people… everywhere. In the lobby. By the pool. In the hallways. Around the common areas. Homosexuality was running rampant.

“Although we knew it was an adult only hotel,” MooSmith21 writes, “I was quite shocked by the amount of gay couples that were staying at the hotel.”

“I’m not homophobic,” he continues, “however, there was a definite feeling of them and us and the gay couples outnumbered the straight couples by two to one at least.”

Because of this, MooSmith21 says, he and his girlfriend’s first romantic getaway together was completely ruined.

“We never spent too much time at the hotel or relaxing by the pool as I felt very uncomfortable,” he says.

That discomfort was kicked up a notch when he claims a guy he had “never spoken to” sent a cocktail to his room.

“Bit perverted if you ask me!” MooSmith21 writes.

The icing on the cake came when MooSmith21 and his girlfriend went out one night only to discover “in the immediate surrounding area there are gay bars, gay hotels, gay wrestling shows” all of which “again made me feel very uncomfortable.”

In the end, MooSmith21 said it was a “great trip” but he would never, ever, not-in-a-million-years stay at that hotel again!

Since going viral, the TripAdvisor review has disappeared from the website. Luckily, one person was smart enough to grab a screenshot of it and post it to social media, where it has been making the rounds.

We certainly know where we’ll be staying the next time we’re in Gran Canaria!

Read the full review below…