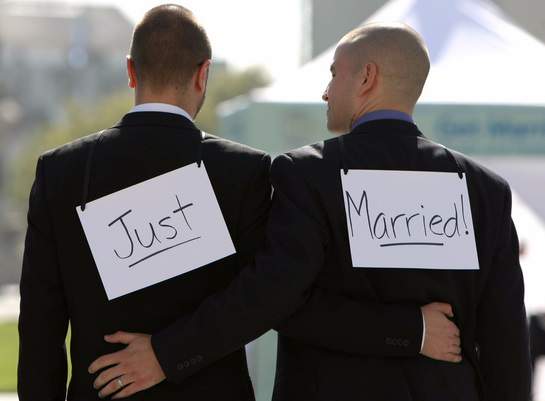 Ahh, wedding season! If you haven’t seen my previous article on how gay men are always getting dumped by their best girlfriend, you wouldn’t know that I am officially a bridesmaid (yes!) at my best girlfriend’s upcoming wedding. I couldn’t be more excited to participate in my lifelong friend’s special day. I’m so thrilled for her, that I began thinking…I, as a gay man, can legally get married! How could I almost have forgotten?!

Recently, I was in Chicago for my first gay wedding. It will go down as one of the favorite memories of my life. To see the blushing brides, the seriously bitchin’ decorations, and the love from both the ladies’ families is enough to last me a lifetime. I have waited all my life to see the beauty that the two girls exuded on that day. As LGBTQ people, we can get married. It’s legal and it’s the law of the land. I cannot repeat it enough. Yes!

Still not over the best wedding I've ever been too!!

Even though I am pathetically single, not by choice – I have time! – I find myself browsing wedding destinations, trying to decide my favorite floral arrangement, seeing if Sheri Moon Zombie would be my ordained minister…I know what you’re thinking. Yeah, I’ll probably end up at the courthouse – ‘not that there’s anything wrong with that!’

My bridezilla antics have led me to dark corners of the internet. The creepy area where studies on LGBTQ marriages and weddings exist. It weighed on me, again and again. Should I find out how the statistics are against me? I did! I appreciate an underdog story, anyway.

“Today’s couples want a personalized celebration that reflects their unique style and personalities together,” said Kellie Gould, editor-in-chief of The Knot. “To-be-weds are opting for mixed-gender wedding parties, personalized processionals and unique twists to long-standing traditions. These trends are in no way exclusive to same-sex couples, but are growing in popularity with this community.”

Are you ready for their study results? Like, how old is the average gay man when he gets married?! I can’t believe it, but it’s 46 years old. Are you telling me statistically I’ll be getting married in twenty years?! I can’t do that to my mother!

The study doesn’t give us only statistics. TheKnot gets down to business, revealing exactly where the LGBTQ Community is spending money on their big day.

There’s more!! Turns out the LGBTQ Community doesn’t believe in the superstition of bad luck to see each other before the ultimate reveal and vow exchange.

“Instead of waiting for a first look or a grand ceremony reveal, many same-sex couples are forgoing tradition and getting dressed together. LGBTQ couples also showed their looks to each other before their wedding day (48 percent of men and 17 percent of women).”

TheKnot did so much for their study that I’d hate to ruin it all for you here. You’ve got to check it out. Please be mindful that if you are not getting married anytime soon, the study could result in a text message rant to your best friend about how you want a boyfriend. Just saying!