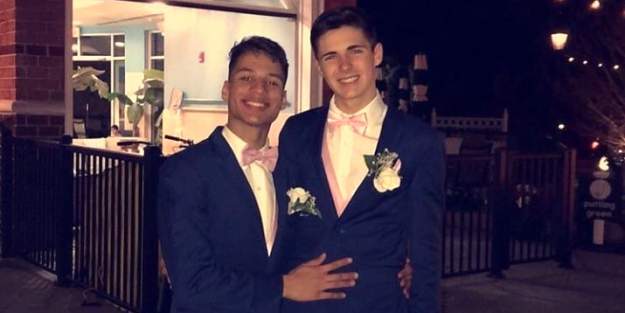 It’s prom season, and like many couples across America, teenagers Theodore Vidal and his boyfriend Colin Beyers were stretching out the end of their prom night.

The two high schoolers, walking in their matching navy blue tuxes and pink bow ties, took a stroll on the boardwalk in Seaside Heights, New Jersey.

As they walked, they approached a rooftop bar where a rowdy group of quintessential “Jersey Shore bros” had been yelling at every couple who passed by to kiss.

Michael Del Moro, a producer for Good Morning America, happened to be out for ice cream with his boyfriend and family members when they noticed the rowdy “bros” and the cute couple at the same time. 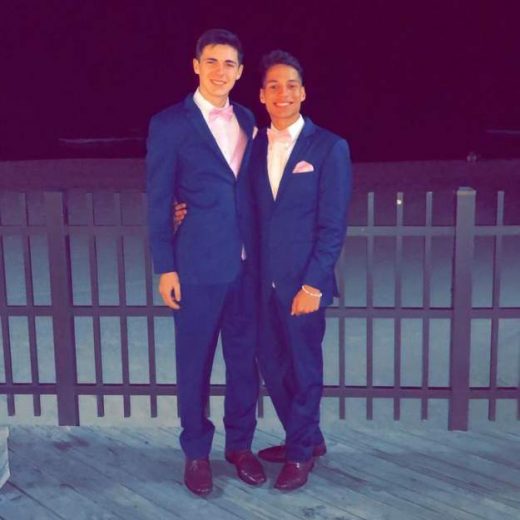 Del Moro was initially worried about what might happen when the gay couple passed the group.

So was Vidal, apparently. He told the local ABC affiliate that he and Beyers readied themselves for the razzing. “It’s South Jersey. Guys pick on us for being gay a lot,” said 17-year-old high school junior. “It’s an area where you normally would get picked on and discriminated against.”

Vidal had come out when he was in 8th grade and knew well the bullying being gay can bring. He told Buzzfeed that he spent much of that year being attacked, bullied, ignored and told to “end his life.”

But, he and Del Moro were surprised when the rooftop crowd cheered, changing their chants of “Kiss her” to “Kiss him!” Vidal and Beyers hesitantly kissed one another, and rather than taunting the couple the rooftop crew went wild screaming their approval.

“A lot of people here think gay people aren’t strong or we’re more girly because we show emotion but we’ve learned it’s better to show what you are feeling and be open and who you are as long as you are pushing forward,” Beyers added.

The cute couple is now planning a summer trip to Greece together before Beyers begins his freshman year at the College of New Jersey this fall while Vidal wraps up his senior year of high school.

Del Moro later tweeted he actually knew some of the rooftop bar “bros.” They were apparently celebrating their friends’ bachelor party and loved the whole thing saying, “We are all very happy for those guys.”

A short thread from here in Seaside Heights, NJ, where—not so long ago—young men would shout the word “f****t” out their car window as we’d stroll along the boardwalk.

Last night, while out for Mother’s Day with our families (read: getting some late-night ice cream because treat yourself!) we noticed a group of rowdy bros gathered on a rooftop bar obnoxiously yelling “KISS HER!” in unison at every apparent couple that passed by.

It was quintessential “Jersey Shore” and, unfortunately, several couples obliged the request to raucous cheers thereby further encouraging the rowdiness. We rolled our eyes.

It’s prom season here, so at that time of night you’ll see high schoolers in their formal attire. As we walked by the rooftop bros, an adorable teenage gay couple passed us in perfectly fitting midnight bue tuxes, matching pink ties, holding hands.

After some hesitation, the young men kissed… and let me tell you: both the rooftop crew and everyone else on the boardwalk just went absolutely wild for them and we all breathed a sigh of relief.

This is not a “look everything’s fine now, thread,” and yes… it’s New Jersey, but I just thought it was worth sharing and an encouraging moment for young LGBTQ folks out there.

Omg… h/t to @JMiller_NJ for finding these two! Good for you being so brave and open Theodore and Colin! https://t.co/Moe0n87J6M https://t.co/oDtcsYSBXs pic.twitter.com/RidLuj3dUy