Home Gay Life That Time I Fell For My Straight Best Friend… Only to Discover... 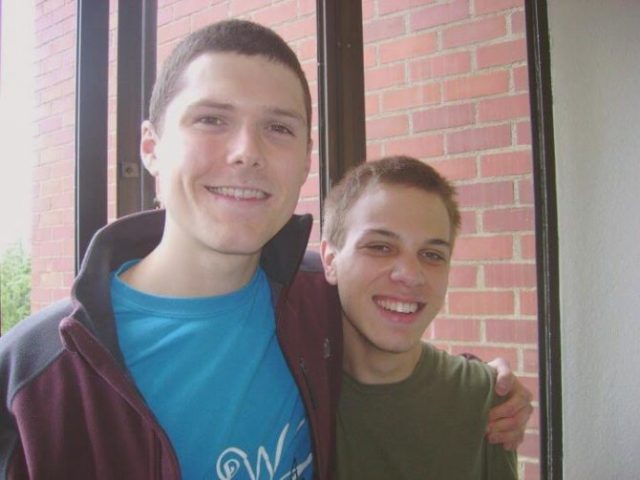 It was the end of my first year of college and I was, for lack of a better term, a complete f-ing mess. And not in the cutesy “OMG I just had three glasses of wine to myself!” kind of way. I was full-blown sobbing in public, skipping classes and using my dorm keys to self-harm. (Isn’t it fun how creative one can get when one wants to die!?)

You see, it had been a rough year. I was living in the closet, going to a counselor who had me convinced I could “cognitively” change my sexuality and, just like Bella Swan, I was unconditionally and irrevocably in love with my straight best friend.

It wasn’t like I was trying to fall for him. It just sort of happened. We had met on the stairs of my college dorm, and I remember thinking he had one the most defined jawlines I had ever seen (my weakness). Seriously, it was like a sharp brick of cheese, and I wanted a slice of it. He asked if I wanted to go watch The Office with him, and so I did. Soon after we met, I told him I was “struggling with my sexuality.” And the rest is history. Only, not really.

For the next year, we would become inseparable. Everyone who knew us, knew us as Josh and Kent. We mostly hung out in coffee shops studying, but occasionally we would hang out at his sister’s house or in the dorms.

Sometimes, I would even spend the weekends with him and his parents. His mom, who I remember typed on a computer a lot, was one of the most generous people I knew. His father, meanwhile, owned a waterproof paper company (aka #DunderMifflinIRL) and was absolutely hilarious. He taught me how to play a game once where you use pennies to do something, but I can’t really remember what.

Needless to say, the more Kent and I hung out, the more I realized I had feelings for him. But he was straight. Eventually, our friendship reached Lindsay Lohan-level toxic, much in part to my severe depression and adorable knack for obliterating any kind of healthy boundaries. There were times when we would hold hands, have awkwardly long hugs and say “I love you.” You know, typical straight friendship goals. Whenever he would try and distance himself from me, I would go Britney-circa-2007 on his ass, fake English accent and all.

In short, I wanted to kill myself; he wanted to save me. We were poetically destructive that way.

This went on for quite some time, until I finally came out to the world. After that, I knew I had to tell him. Opening my laptop, I pulled up Facebook and wrote him a message confessing my feelings (so young and hip of me, I know!). Here’s how it went:

Me: Sorry I was crazy. Also I love you.

And that’s how it was, for a long time, until years later, when he messaged me on Facebook:

Hey Josh, I just wanted to message you this before you found out another way. But recently I have begun to identify as gay. I wanted to message you to let you know the timing of it all. Until last summer, I was very “good” at ignoring my attractions to men and mistook friend crushes on girls for romantic crushes…. I want you to know I was not lying to you back in 2011 when you came out. I truly did not think I was gay (despite the attractions I noticed) and I did not have romantic feelings for you….

Reading his message, I couldn’t help but laugh. Finally! For years, my friends who knew the situation would debate with me.

It didn’t take me long to respond. “Awwww Kent!!! Thank you SO much for messaging me. I am so happy for you!” I said. “Seriously, NO hard feelings about things that happened in college. I should apologize for all the crazy shit I put you through. We are both probably very different people now. And besides…Coming out is such a journey and we all reach/approach it differently. I’m just glad you are (hopefully) happier and feel more alive now!”

That was almost a year and a half ago. Honestly, I never lost sleep over his coming out or anything. Part of me expected the day would come (I have killer gaydar, what can I say?). And besides, so much time had passed that all I really felt was genuine happiness for him. We had obviously been through a lot together, but we were also very different from the people that met on the stairs all those years back. However, much like many of my forays into hot mess territory, I can’t help but think “Oh dear, god” and cringe when I think about the past. Was that really me? I’ll wonder. But at the same time, I feel oddly thankful for that time. I’m thankful for memories of pennies and waterproof paper, of coffee shops and The Office. I’m thankful with how far of I’ve come, and how far he has too. I’m thankful that I no longer want to die. I feel happier with who I am, and I think he does too.

In fact, word on the street is that he’ll be getting married soon. I’ll let you know if I get an invite.