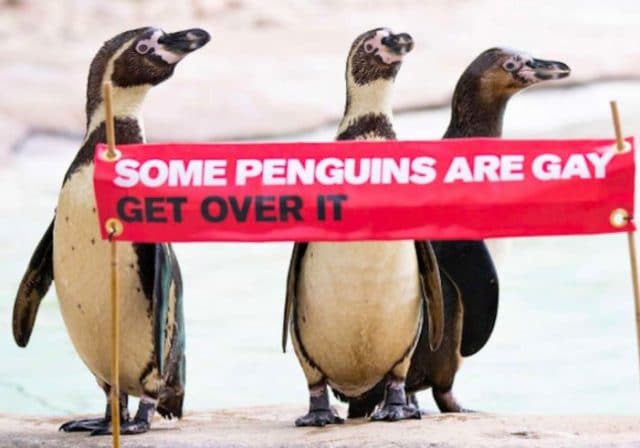 Zookeepers at ZSL London Zoo are commemorating Pride this year by celebrating one of the zoo’s best-known same-sex couples: Ronnie and Reggie, a pair of male Humbolt penguins that have been paired since 2014.

In addition to humorously inviting gay penguin couples around the world to participate in London’s July 6 Pride parade — was the invite written in Penguinese? — the zoo has given Ronnie and Reggie a small banner in their habitat that reads, “Some penguins are gay. Get over it.”

The banner is in the same color and font as the famous “Get Over It” campaign started by Stonewall, the U.K.’s most prominent LGBTQ organization. It’s also a reminder for people to calm down whenever they see a same-sex couple walking hand-in-hand (or flipper-in-flipper).

The zoo shared a little more about Ronnie, Reggie and its other same-sex penguin couples:

“Ronnie and Reggie got together in 2014, and famously adopted an egg that was abandoned by another couple a year later.

The pair shared parenting duties of their chick, Kyton, until he fledged the nest. They remain as strong as ever and are often found snuggled up in their nest box together.

The duo share their home with 91 other penguins, including fellow same-sex couples Nadja and Zimmer, and Dev and Martin.”

In addition to the banner, members of the zoo’s LGBTQ employee organization, Team Pride, will march in the city’s Pride parade (presumably without any penguins).

While headlines make it seem as if penguins are the animals that most often exhibit same-sex attraction, over 1,500 animal species have been documented exhibiting homosexual behaviors. Only one animal exhibits homophobia — humans. Who’s unnatural now?

In case you were wondering, the ZSL in ZSL London Zoo stands for “Zoological Society of London,” an animal conservation charity established in 1826. The ZSL opened the zoo in 1828.