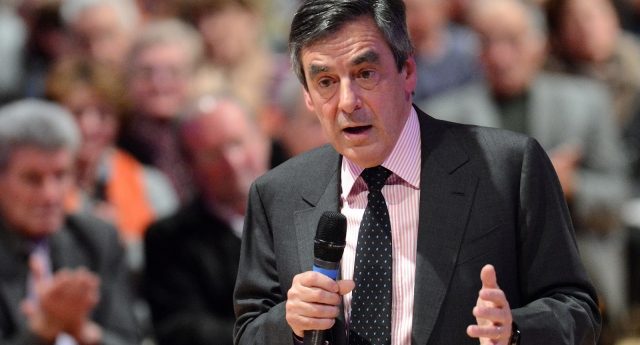 A politician who has pledged to attack same-sex adoption rights is the new favourite to be President of France… and his main opponent is a far-right nationalist.

François Fillon was the surprise winner of the centre-right conservative primary this month, edging out competition from former President Nicolas Sarkozy and Former Prime Minister Alain Juppé ahead of next year’s Presidential vote.

Mr Fillon, who strongly opposed the introduction of same-sex marriage in 2013, has shrugged off calls to directly repeal same-sex unions if elected President – instead planning to pare back the rights of gay couples to adopt.

The candidate, who voted against an equal age of consent in 1982, says he wants to change the law to ensure “a child is always the fruit of a father and mother.”

Under Fillon’s proposals, same-sex couples would be banned from fully adopting a child, under a new requirement that children must have both male and female parents.

In his platform, Fillon wrote: “A repeal of [same-sex marriage] is not possible… but without questioning the principle of marriage for same-sex couples, the rules concerning parentage must be reviewed, because it is in the child’s interest, which for me comes above all other factors.

I know that gay couples welcome children with love, but it does not seem right that the law allows to consider that a child is a son or daughter of two parents of the same sex.”

Mr Fillon continued to claim that the “biological” meaning of parenthood should be restored “in respect of a father and a mother”.

Under the change, which he insists would not be “retroactive”, full adoption would only be available to couples comprised of “two different sex parents”.

Same-sex couples would still be able to gain a lower tier of guardianship rights that exists under French law – but would never be able to be fully considered the parents of their children.
LGBT people will face a pretty horrendous choice between a rock and a hard place at the ballot box next year, as Fillon’s expected run-off opponent Marine Le Pen, of the Front National is also no ally of LGBT rights.

The FN has a long history of extreme anti-LGBT politics, aligning itself with aggressive anti-gay groups during the fight against equal marriage.

The party is home to a number of openly homophobic politicians who have attacked the “evil homosexual lobby”, with FN deputy Louis Aliot claiming Paris Pride is a “exhibitionist symbol of a militant factionalism”.