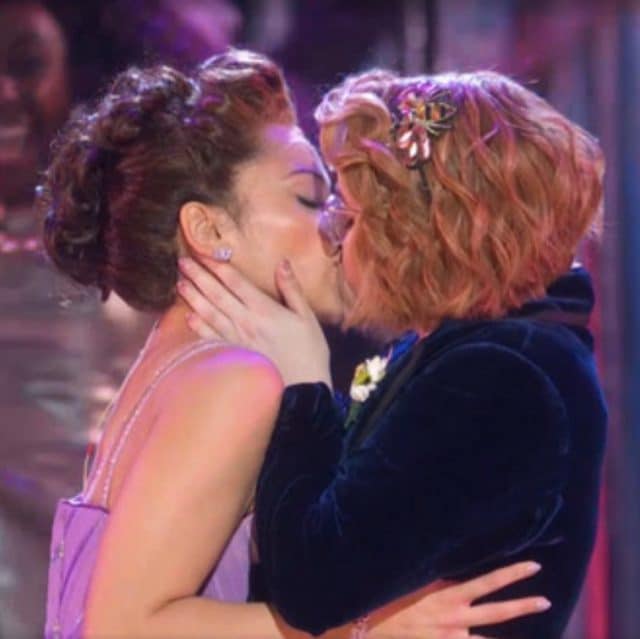 The cast of queer-inclusive Broadway musical The Prom ended their Tony Awards performance on Sunday (June 9) in the perfect way — with a same-sex kiss.

The musical, which is due to be made into a Netflix movie, tells the story of a young lesbian woman in high school who is not allowed to bring her girlfriend to prom. It was nominated for seven Tony awards and has been praised as a benchmark in lesbian storytelling.

The cast performed a medley of songs including “Tonight Belongs to You” and “Time to Dance” before Caitlin Kinnunen, who plays Emma, passionately kissed her character’s girlfriend Alyssa, played by Isabelle McCalla.

It was a big moment for national TV and drew loud applause during the show’s dress rehearsal and telecast. But the cast stirred a minor controversy last year when they did the same thing at the Macy’s Thanksgiving Day Parade —the first time in the parade’s history that a same-sex kiss had been televised.

The parade is a staple in many families’ Thanksgiving Day routines, and while countless viewers shared their support, anti-LGBT activist Linda Harvey called for a boycott of the department store which presents the parade.

In spite of this, The Los Angeles Times reported that none of the cast had any moment of hesitation about showcasing the event at the televised awards show. “Not one person needed a pep talk,” said Casey Nicholaw, who directed the production.

Kinunnen, who was nominated for Best Leading Actress in a Musical along with her co-star Beth Level, said: “When you love someone, you kiss them — it’s not a big deal.

“Yes, there’s always backlash from the people who think it’s wrong and unacceptable, but there’s also always 10 times the amount of people who say, ‘Thank you, we feel seen and represented; this should be the norm.’ It’s been amazing the amount of love and support we get.”

She added to Vulture before the ceremony: “People are just going to keep seeing it, because it is what it is.”