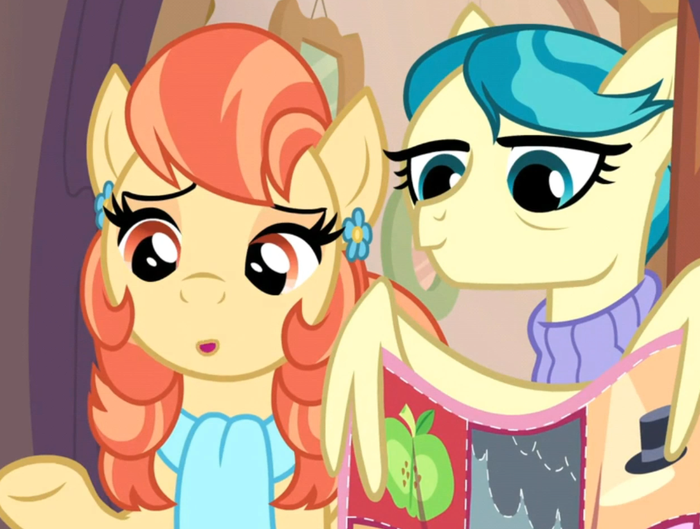 The final season of My Little Pony: Friendship Is Magic will include a lesbian pony couple, just in time for Pride Month.

An upcoming episode titled “The Last Crusade” will feature Aunt Holiday and Auntie Lofty, a couple who take care of the school-aged character Scootaloo.

And no, they’re not just sisters or live-in gal pals. They are a bonafide romantic couple.

According to Comics Beat, the two actually appeared previously in a book, although this will be their first animated appearance. At the time, a writer and producer of the show, Michael Vogel, confirmed on Twitter that they are indeed a couple.

What a cute couple!!! https://t.co/h7EroakFpQ

@MLPRainbow20 Well they aren’t sisters so….

@MLPRainbow20 When I say «cute couple» I’m saying that Aunt Holiday and Auntie Lofty are a cute couple. Yes.

Hey hey!!! @NicoleDubuc, @joshhaber and I doin what we can to bring more EQuality to EQuestria!!! #PrideMonth https://t.co/YPOvvxT3v0

The episode has already aired in Europe, but US audiences will get to see it on Saturday.

Vogel told BuzzFeed News that the idea for the aunts was a collaboration between himself and showrunners Nicole Dubuc and Josh Haber.

«I think it’s fantastic that we can show that what truly defines a family is love — that, to me, is the core of My Little Pony,» said Dubuc.

It all started with getting them approved for that book.

«Nicole and I thought this was a great opportunity to organically introduce an LGBTQ couple in the series ,and we asked Hasbro and they approved it,» Vogel said.

«With Josh and Nicole running the final season together, it was something we all wanted to do — bring this out couple into the final season and make them ‘officially’ a part of the MLP world.»

«Diversity and representation are important for kids for so many reasons, and it’s my first priority on everything I work on,» he said.

For Vogel, who is gay, it was important to him for the show to reflect the real world.

“My Little Pony has always been about friendship and accepting people (or ponies) that are different from you. So it just felt like something important to do,” he said.

Fans are very excited about the aunts.

Remember how I said Scootaloo had lesbian aunts in My Little Pony but they never appeared animated only in the novels?

For some, it was a happy lil’ surprise.