Home Gay Life These men worked for different Catholic schools. Until they got married &... 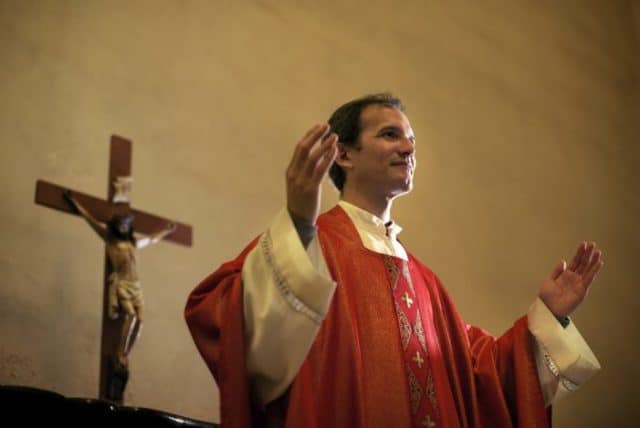 Two men, both teachers at different Catholic schools, married in 2017. Now, the differences in how their employers treated them stands in the middle of a court case against the Archdiocese of Indianapolis.

Joshua Payne-Elliott, who had not been publicly identified before now, was fired from his teaching position at Cathedral High School after the church directed the school to fire him.

He was not alone. His husband, Layton Payne-Elliott, teaches at Brebeuf Jesuit Preparatory School and, unlike Joshua, his school refused to terminate his employment.

Because they refused to let Layton go, the archdiocese stripped the school of its Catholic status. Cathedral High School fired Joshua to avoid losing theirs.

Now, a lawsuit against the Archdiocese of Indianapolis on behalf of Joshua Payne-Elliott, alleges the archdiocese unjustly meddled in Joshua’s employment, forcing Cathedral High School to fire him.

“We hope that this case will put a stop to the targeting of LGBTQ employees and their families,” said Joshua Payne-Elliott said in a statement from his attorney, Kathleen A. DeLaney, reported in the Indianapolis Star.

The lawsuit is seeking compensatory damages, emotional distress damages, and punitive damages, as well as attorneys’ fees from the Archdiocese.

“We intend to hold the Archdiocese accountable for violations of state and federal law,” said DeLaney.

Cathedral High School fired Joshua near the end of June after nearly two years of deliberation between the school and the Archdiocese. Joshua was terminated once Archbishop Charles Thompson made it clear to the school that it would no longer be recognized as a Catholic institution by the archdiocese if he remained on staff.

Brebeuf Jesuit Preparatory School was given a similar ultimatum over Layton Payne-Elliott. They refused to fire Layton, and were stripped of the status as a Catholic institution.

In response to the lawsuit, the Archdiocese issued their own statement.

“In the Archdiocese of Indianapolis’ Catholic schools, all teachers, school leaders and guidance counselors are ministers and witnesses of the faith, who are expected to uphold the teachings of the Church in their daily lives, both in and out of school,” read the statement.

“Religious liberty, which is a hallmark of the U.S. Constitution and has been tested in the U.S. Supreme Court, acknowledges that religious organizations may define what conduct is not acceptable and contrary to the teachings of its religion, for its school leaders, guidance counselors, teachers and other ministers of the faith,” added the statement.

DeLaney argues that Joshua Payne-Elliott, however, was not a minister, but a teacher. Joshua was not party to religious instruction, but taught social studies and language.