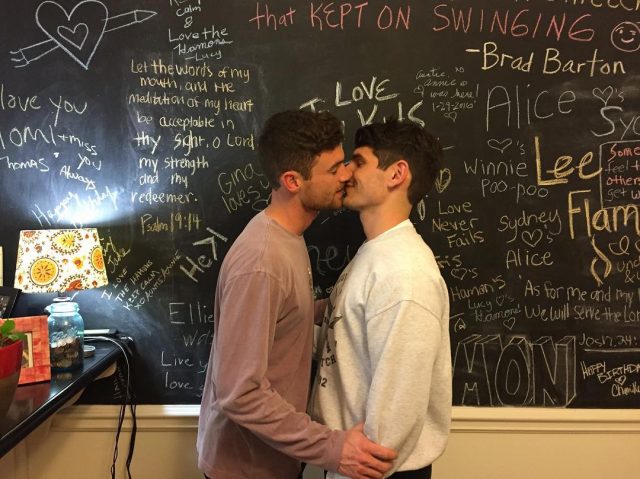 Couple PJ and Thomas McKay star in the makeover show “Down to the Studs.”

Couples who love to decorate and flip houses together are a staple on HGTV. Now it looks like the network might be following in the footsteps of TLC’s Nate & Jeremiah By Design with a show starring a gay couple who loves to design and decorate.

PJ and Thomas McKay, a married couple who refer to themselves as “The Property Lovers,” flip houses in their hometown of Chattanooga. And last weekend, HGTV aired the pilot for their new show called Down to the Studs.

It was test run to see which pilot had the biggest audience and social media interaction. PJ and Thomas say the pilot will re-air “hopefully sometime in the next couple of weeks,” but you can support them by using hashtag #HGTVDowntotheStuds.

Off-camera, the guys post a plethora of “awww”-inducing pics on Instagram and document their travels on theirYouTube channel.

Y'all! Happy Saturday ?. We hope everyone going to #pride today has a blast! We wish we could go, but we will be working on a couple of houses instead. Hoping to go to #NashvillePride next weekend though! #happysaturday

We've enjoyed reading all of your comments and messages about #DowntotheStuds and we couldn't be more grateful for y'all. The episode will air again, hopefully sometime in the next couple of weeks and as soon as we have an air date we will let y'all know! In the meantime, thank you for your continued support of our pilot ❤️. Seeing the way you're all coming together to promote this show is an indescribable feeling. Here's a behind the scenes look at a scene that didn't make the show (not the reno house in the background) ? @hgtv #hgtvdowntothestuds #hgtv

Down to the Studs airs just a few months after Chip and Joanna Gaines of HGTV’s Fixer Upper, were criticized when it was revealed their church opposed LGBT rights.

In 2014 HGTV was set to air, Flip It Forward, starring twins David and Jason Benham. When the the Benhams’ staunch anti-gay, anti-choice views became the subject of controversy, the network pulled the plug.

We spent all day at the pool yesterday and maybe sorta kind of got burnt ☀️ but on the plus side, we did our first #FacebookLive last night with our first #husbandtag! Go like our page "The Property Lovers" on FB to watch it because we answer a lot of FAQs. What did you guys get into this weekend? Happy Monday y'all! #husbands #sundayfunday

Happy #Pride month! Today we are feeling grateful for all of the people that came before us and who still continue to fight for LGBTQ rights. We salute you and celebrate EVERYONE in our community this month. Be out, be proud, and always remember to be yourself, because you're amazing and you deserve to be celebrated ? #pridemonth #LGBTQ #tbt

Sunday nights are our fave, and the slight chill in the air tonight is making it even sweeter ? We spent the entire weekend painting, what did y'all do? #SundayNight

#Sponsored Getting ready for the day in the Dove Men+Care Elements Treehouse feels like you're getting ready in an outdoor spa, and with using Dove's new range of products, we feel confident that we'll be smelling good all day long. They used ingredients like charcoal, sandalwood, and sage that are also incorporated throughout the treehouse as well. We'll show more of that later, but for now we are brainstorming for future projects because this treehouse is really inspiring us! #DoveMenPartner #DiscoverElements #DMCPartner #dovemencare

It's hard to believe this was two years ago tomorrow. A part of us feels like we've been married forever but there's still a part of us that loves being newlyweds. Merry Christmas Eve, everybody. We hope your wishes come true this year, too! #ChristmasEve #MerryChristmas #thepropertylovers #throwback

Because y'all always say we look alike, we thought this was only appropriate ? ?? #happyhalloween #propertybrothers #hgtv #thepropertylovers

Thanks guys for all the sweet responses to our first Q&A on #YouTube. We look forward to sharing next week's video. Teen and Bean want a weekly cameo appearance. #divas #thepropertylovers #husbands

If you would have told us 10 years ago that we would one day be sitting at a dining room table eating Chinese takeout, about to watch #ScreamQueens and brainstorming ideas for a future house renovation, all while legally married to another man…..we would have said ??. Coming out has changed our lives and brought us to a place where we feel happy, comfortable, and most importantly- loved. In other words, it brought us home. And for those of you who aren't there yet and may still be struggling, please do NOT give up hope. You are stronger than you think. Happy #NationalComingOutDay #thepropertylovers ???