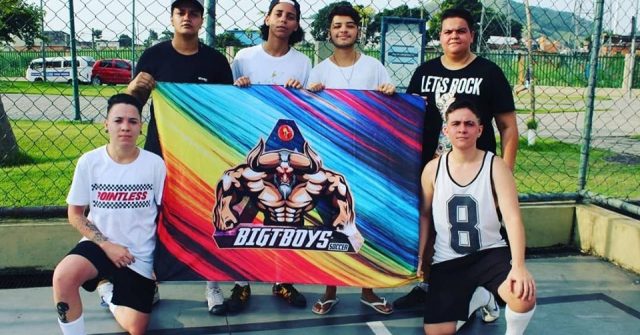 The BigTboys call themselves Rio de Janeiro’s first transgender men’s soccer club. The team has 24 members, they’ve reportedly been training for about four months and they just played their first official match.

Although their team striker Caique Rodrigues scored a goal, the BigTboys lost their first game against the “more established” gay team, the Alligaytors, 9-1.

The Associated Press reports that the BigTBoys and Alligaytors are just two of a handful of LGBTQ teams that have popped up in the country to combat the country’s rising tide of queer-phobic sentiment.

Their story has also recently spread through major news outlets like the Washington Post, the Los Angeles Times, the Taiwan News, and Spanish-news outlets.

Despite Brazil’s reputation as a liberal bastion in South America — and the fact that its highest court recently declared any form of queerphobia as unconstitutional — an estimated 167 trans people were murdered there just last year. In October 2018, Brazil elected anti-LGBTQ president Jair Bolsonaro and earlier this year, the country’s first openly gay congressman had to flee the country because of death threats.

And yet, the BigTboys provide a haven where these trans athletes can feel more at home. Team members say the team has helped rescue them from suicide and find hope, stability and a family where they can openly discuss their lives and hardships.

“People think we are fragile, that we are dolls, aesthetically changed,” said the team’s 26-year-old midfielder and city hall employee Robert Ismerim de Souza. “We’re here to win, to conquer a lot of things.”

The team is all the more exceptional because it seems to consist mostly of trans men, bringing some visibility and inclusion to a group commonly ignored by mainstream media and the sporting world.