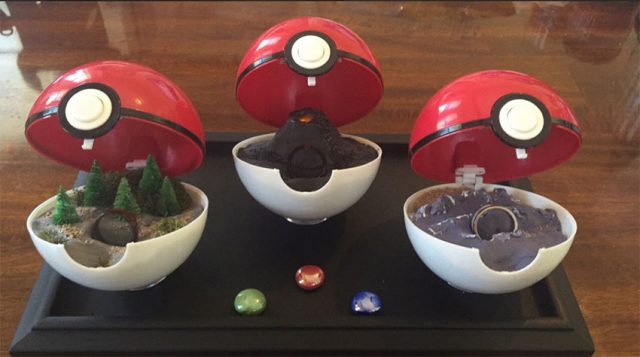 Which one would you choose?

When Brett decided to propose to Max, he came up with one of the most cutest and geekiest ways in the world to do it.

Both lovers of Pokémon, he decided to offer him a ring of his choice; a ‘grass type’, a ‘fire type’ and a ‘water type’.

The ‘grass type’ ring had a wooden inlay, the ‘fire type’ was black with a red gem, and the water type had a mother of pearl inlay.
All he needed to do was find out a perfect way to present them to him, and there it was: Pokéballs. ‘I’ve been scheming like a madman for months, having things shipped to my friends, and hiding art supplies,’ Brett said on his Tumblr. ‘Max, for his part, has been telling me pretty much every day since we’ve started that he’s going to marry me. Somehow, I was still nervous when it came time to ask about making that official.

‘At the beginning of every adventure, you need to pick a partner. I chose him. So, I figured if he said yes, he could decide what to wear on his finger.

Adorable. By the way, Max picked the fire ring, but still got to keep the other two rings.

Brett said: ‘Whatever he picked as his official starter will “evolve” at milestone anniversaries. I got plans.’