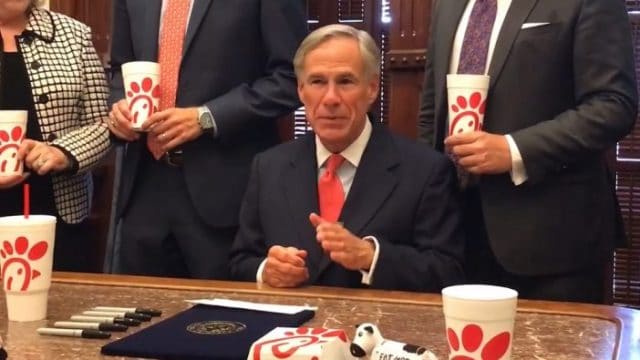 The governor of Texas celebrated the passage of an anti-LGBTQ bill by eating Chick-fil-A.

Last month, Governor Greg Abbott (R) signed what was dubbed the “Save Chick-fil-A” bill into law. The bill banned government entities, including local governments, from taking “adverse actions” against businesses because of their “religious beliefs” or “moral convictions.”

The bill was inspired by the city of San Antonio refusing to give Chick-fil-A a lucrative contract to operate at their local airport after the fast food chain donated millions of dollars to anti-LGBTQ organizations over the past decade.

Abbott tweeted last Thursday a video from the ceremonial signing where he was surrounded by Chick-fil-A’s products.

“Discrimination is not tolerated in Texas,” Abbott said.

Texas does not ban discrimination on the basis of sexual orientation and gender identity, and for years the state legislature has considered a bill to ban local governments from passing LGBTQ-inclusive civil rights legislation. So discrimination is very much tolerated in Texas – as long as it’s against LGBTQ people.

He said that businesses should not face “discrimination” or “lose a government contract” because its owners “gave to a church or to the Salvation Army or to any other religious organization.”

Today I signed the ⁦@ChickfilA⁩ law in Texas.

And, had a great lunch.

No business should be discriminated against simply because its owners donate to a church, the Salvation Army, or other religious organization.

Fox & Friends had an on-air Chick-fil-A meal to celebrate anti-LGBTQ legislation last month, and Donald Trump has been known to serve Chick-fil-A in the White House because “We like American companies.”