Home Gay Life This picture was taken minutes before ISIS threw a man off a... 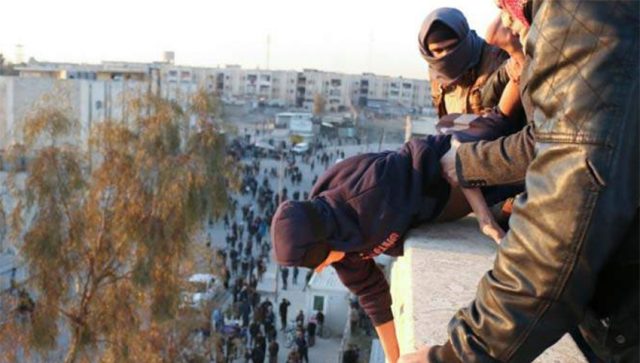 Gay people, according to ISIS, are the ‘worst of creatures’

ISIS have murdered another supposed gay man in its vile campaign to rid the world of homosexuality.

But in new photos released by Islamic State, religious police carried out an execution of a man they claim to be gay in pictures released on terrorism channels on 9 January.

It shows the ‘hisbah’, or religious police, carrying out an execution of a man accused of gay sex, in Mosul, Iraq. An accompanying summary of the report reads: ‘Besides the work of the calculation center in the city of Musel – Establish a limit on the action of the Sodomites’.

A ‘calculation center’, is essentially a religious tax office. Led by the police, it requires those living in Iraq to donate 2.5% of their earnings to the state.

Above, it shows a baying crowd waiting as religious police officer reads out the ‘crime’ of the one being executed. The accused is blindfolded and is then prepared to thrown off the roof – face first. If the man survived the fall face-first, it is very likely the crowd would have stoned him to death. Hundreds of LGBTI people have been killed by Islamic extremists. Gay people, according to ISIS, are the ‘worst of creatures’.