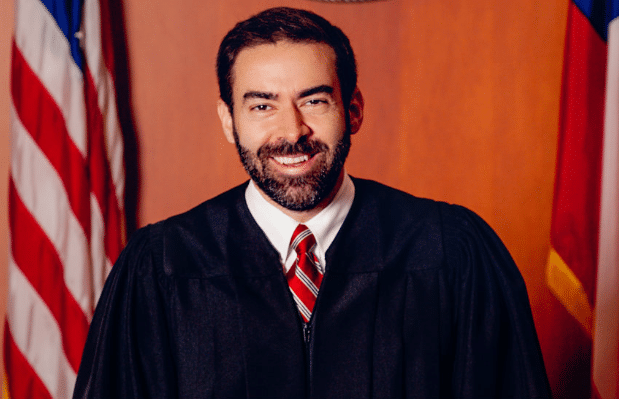 The former Republican representative recently made his sexuality public

It fast happened when he simply posted a photo on Twitter earlier this month. What’s special about the photo? It’s from the Stonewall Bar Association spring mixer.

The Stonewall Bar Association is an organization of LGBTQ attorneys, judges, and other people within the law world.

Evan and I had a wonderful time at the Stonewall Bar Association Spring Mixer. Thanks for having us! pic.twitter.com/Wilb3UnVga

Then, yesterday (1 May), he released a statement to Project Q Atlanta and confirmed he’s bisexual.

He wrote that the mixer was his first time coming out as bisexual in a public way.

‘My wife Evan and I have made a mutual decision that it would be a positive step for me to come out, and she proudly stood with me at the Stonewall Bar event,’ he said.

DeKalb County in Georgia, where Jacobs presides, is home to a ‘substantial LGBTQ population’.

‘I see LGBTQ citizens in my courtroom on a regular basis, particularly as prospective jurors, and in other courtroom roles as well,’ he continued. ‘DeKalb County has never had a trial judge who openly identifies as LGBTQ. This is something I can change simply by sharing this part of who I am with the public.’

He further said that his identity has no effect on his job as a judge. However, he hopes his coming out helps diversify the law community.

‘Evan and I are the parents of three wonderful children who are growing up quickly. We are happy they are growing up in a world in which young people can be who they are as soon as they recognize who they are. We want that world to be a reality for them. The most meaningful contribution I can make to that world is to be authentic myself.’