Home Gay Life This town that survived a deadly typhoon is now putting on its... 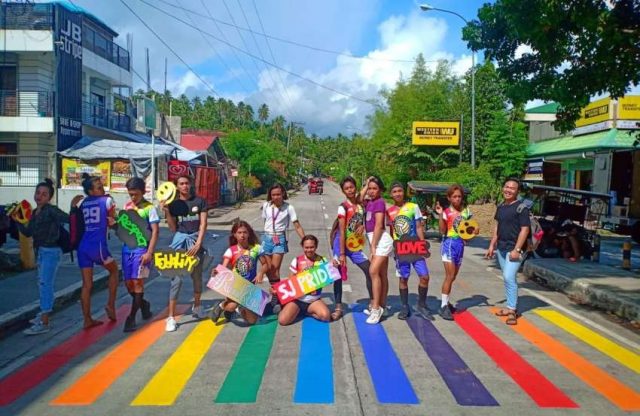 A village in the Philippines which has survived typhoons, poverty and isolation will rise together to host its first Pride.

‘Rampa’ is Filipino gay slang which means ‘sashay’ or walk with pride or happiness. ‘Este’ means east in the local Waray language.

Rampa Este is a jam packed multi-day festival. Organizers launched with painting a rainbow crossing in the middle of towns.

‘We painted the rainbow crossing to let other rural organizations know that they can also organize just like San Julian Pride,’ Andag told Gay Star News.

‘We make our intersectionality (LGBT+ identity, rural, poverty and proneness to natural disasters such as Haiyan in 2013) our unique identity and strength.

San Julian is often at the center of natural disasters which exacerbate its poverty and isolation. In 2013, the deadly Haiyan typhoon ripped through the Philippines, killing more than 6,300 people.

Even though people in town are supportive of the Pride organizers are still struggling to cover costs.

‘Locals are very supportive because they see that San Julian Pride is a credible and active organization,’ Andag said.

‘We also, at every opportunity, make it known that San Julian has a municipal anti-discrimination ordinance which passage we actively lobbied with the local government.’

Andag also wants the Pride to send a message to national lawmakers to which would grant anti-discrimination protections to LGBTI people.

‘Our organizing is hampered by poverty. We are still looking for sponsors,’ Andag said.