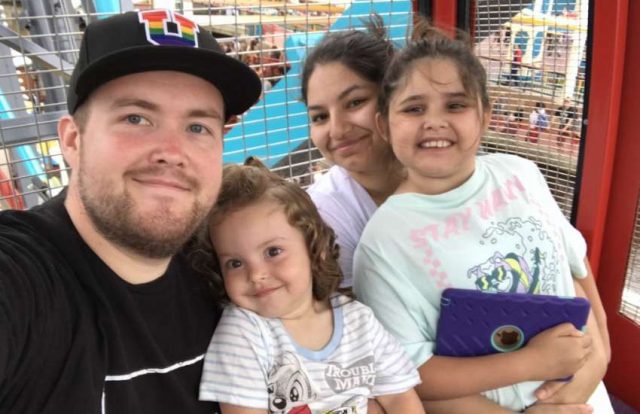 A father’s daughter couldn’t control her excitement when she saw a drag queen for the first time at Salt Lake City pride, and Twitter collectively melted.

Austin and his two-year-old, Madilyn, hit the parade last weekend (1 June) when she saw the queen, which Austin caught on camera.

It’s safe to say that all of Twitter’s hearts were reduced to mush after seeing it, although, not all were happy.

Austin, 26, and Madilyn, 2, spent their Saturday walking along the sidewalk on 100 south 600 West street, near the gay bar The Sun Trapp.

That’s when she saw her. Madilyn saw a drag queen for the first time. Austin admitted to Gay Star News he doesn’t recall the queen’s name, but it may have been on a float put on by the bar.

‘She’s only 2 and loves dresses and the color pink,’ he said, ‘so all she is thinking, I’m sure, is that she sees princesses.

‘She has a fun personality and is super smart so she was super excited and saving and making that face she made a lot and saying “woahhhh.”’

Austin managed to capture the amazing moment on camera (on a live photo) and uploaded it to his Twitter account.

While Austin isn’t gay himself, he said he appreciated all the ‘outpouring of love’ that the post has received.

Madilyn is just two years old; what kind of world will she grow up into? ‘I see my daughter growing up in a world that’s getting better every day,’ her father said.

‘But there’s also a gap that’s getting more extreme. We love everyone. If we don’t agree, that’s ok, but you be nice.

‘She has to be, and will be strong with how things are nowadays. We’re already proud of who she is becoming.’

When Austin dropped the photo on Twitter, it sent everyone (just over 117,000 people and counting) into a meltdown. Quickly earning it the title of ‘pinned tweet’ on Austin’s profile.

‘Oh, this is magical,’ one user said.

Another user said: ‘This is the most adorable thing I’ve seen all day.’

However, Austin said that not all reactions to the aggressively adorable photo have been all that positive.

‘It started with a local (mostly) “group” called the DezNat, but with more time and exposure, expanded to just plain homophobes trying to troll.’

‘DezNat’ are a branch of the Alt-Right that stands for ‘Desert Nation.’ A loose, nascent affiliation of Mormons that target the LGBTI community online.

The have a strict and defined position on homosexuality, wherein, doctrines state it is a sin.

‘Honestly I probably wouldn’t have posted it if I would have known the things they’d be saying,’ Austin said, ‘but it’s up now and it’s a positive message so it’s staying up.’