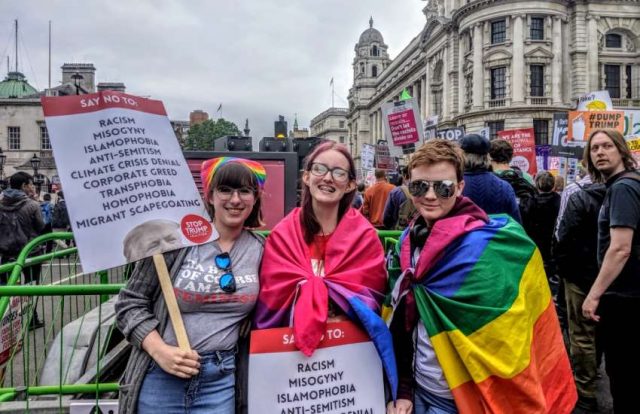 It was the Donald Trump baby blimp’s time to shine as thousands took to central London to demonstrate against US president Donald Trump’s state trip to the UK.

Today (4 June) the sidewalks of central London were heaving with LGBTI people and allies ahead of a crucial, post-Brexit meeting between Trump and UK Prime Minister Theresa May.

Despite the thousands of people closing traffic routes and roaring out of megaphones, Trump dubbed the protest ‘fake news.’ He claimed they were ‘very small.’

Protesters congregated at Trafalgar Square, the bustling center of the capital, at 11am sharp.

Before long, thousands marched south, banners held high chanting ‘stand up, fight back,’ towards Whitehall. Where the president was scheduled to meet lame-duck PM Theresa May for a midday meeting.

While Trump was expected to pressure May not to allow Huawei, the Chinese telecommunications company, to build its wireless network in the UK, protesters hoped to expense their own pressure.

This came in the form of a battalion of talks from politicians and activists, including shadow home secretary Diana Abbott and opposition leader, Jeremy Corbyn.

Standing in a trinity of flags cutting colorfully between all the red ‘Stop Trump’ signage, were Hannah, Paris, and Bethany.

The three students had come from three corners of the country – Kingsland, Hampshire, and Nottinghamshire – to join the demonstration today.

On Horse Guards Avenue, 19-year-old Hannah, wearing a pride flag as a headscarf, explained: ‘We’re here today because we think Trump is a twat.

‘Queer people should care because of the horrific things he’s caused them.’

While Paris, wearing their ‘gay shades’ and who has written a musical on Brexit, said: ‘Trump has contradicted himself so many times. 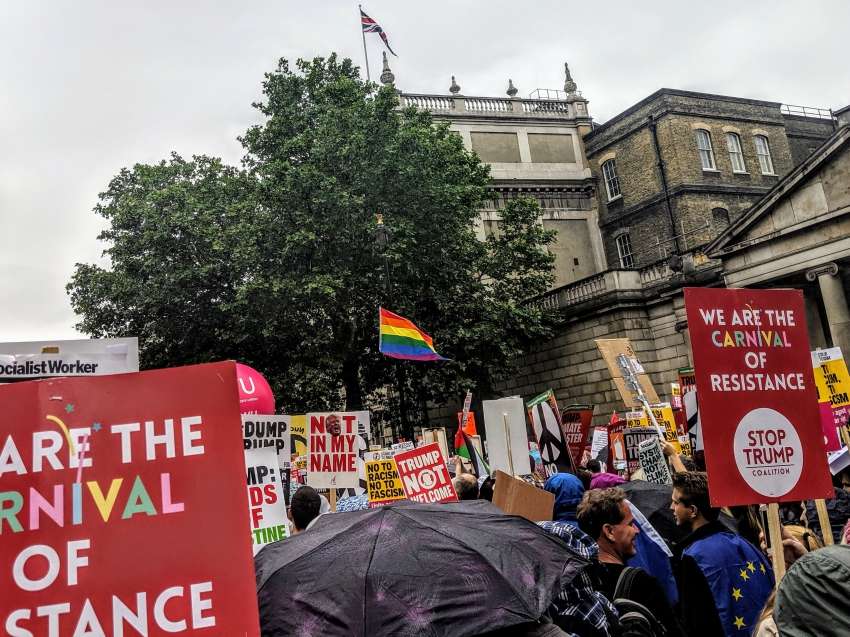 Pride flags were waved high in the air in solidarity | Picture: Reporter’s own

‘The whole , basically giving hospitals the choice of whether they care for LGBTI people, and then coming out in the beginning of Pride month saying he’s going to do everything he can for LGBT people. Why?

‘Just take one side.’

Bethany, 19, with purple hair matching the bisexual pride flag blanketing her, said: ‘Last month, Trump didn’t even recognize Pride. Yet, , he does.

Sam Kelly is a gay man who came from Hertfordshire, around 24 miles north of London, for the day.

Draped and caped in a Pride flag, the 26-year-old told me about how crucial that everybody – LGBTI and allies – take to the streets. He figured about ‘50%’ of protesters were LGBTI.

‘We need to send a message that there is a corruption in the world, and Donald Trump is an embodiment of that corruption.

‘He is the sickness that sits within us all that we keep in control. And he shows it to that world, and he is the face of the Western world. 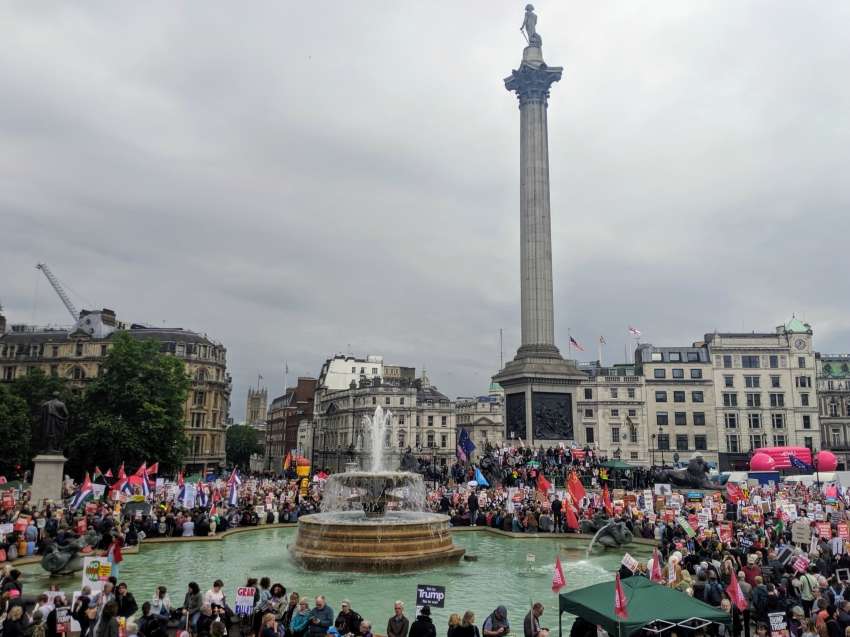 Thousands took to Trafalgar Square, in the center of the capital, to make their voices heard | Picture: Reporter’s own

‘His erosion of liberties that we have taken for granted for over a decade or so. That we, in the UK, take for granted every day in the run-up to Pride. We go and have a party, but meanwhile, in the US, they’re having it all taken away.’

Denis Fernando was leading the charge of a bloc of students in the march. Fernando, who runs the anti-racism LGBTI group, Rainbow Coalition Against Racism, was there to battle against the ‘hostility’ of Trump.

Before managing the main stage, and before it rained, he told me: ‘Trump has on average targeted LGBTI communities almost once per week since his presidency, as documented by GLAAD, and has targeted trans children in schools.

‘Far right groups like the KKK are emboldened by his continued reaction and that will impact on LGBTI people and us all .’

Leanne MacMillan, director of global programmes at Stonewall, spoke to Gay Star News about the importance or recognizing the Trump administration as a ‘threat.’

She said: ‘We have been increasingly alarmed at the steps President Trump and his administration have taken to row back the rights of trans people in the US. 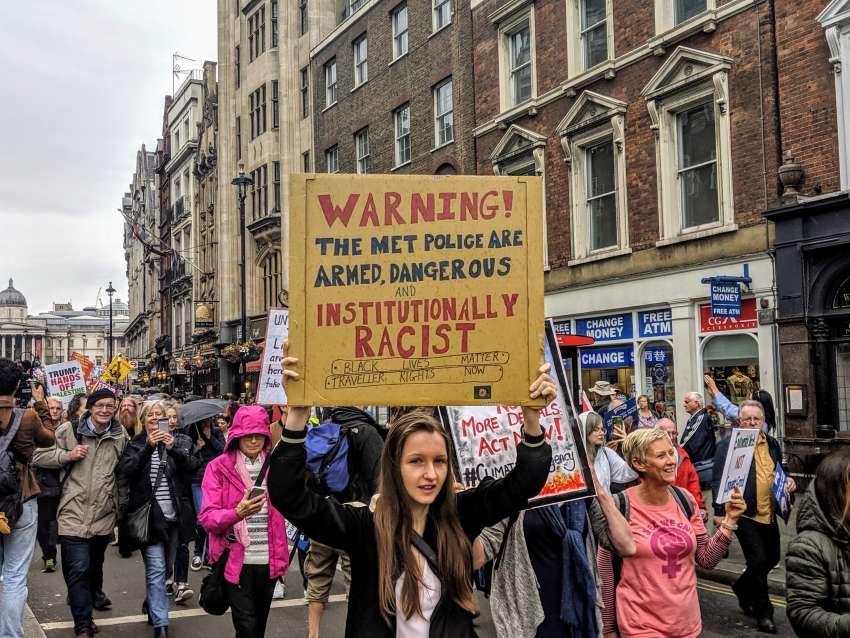 ‘Trump and his administration have consistently shown a disregard for the wellbeing and safety of all groups who face discrimination and send a clear message that the most powerful person in the world does not value equal rights for the LGBT community, in the US and beyond.

‘Trump’s return to Britain is an opportunity to come together and show why LGBT equality need to be something that matters to everyone. Together, we are stronger than any hate that might try to divide us.’

It’s a formal trip to the UK by a head of state, typically at the Queen’s invitation. 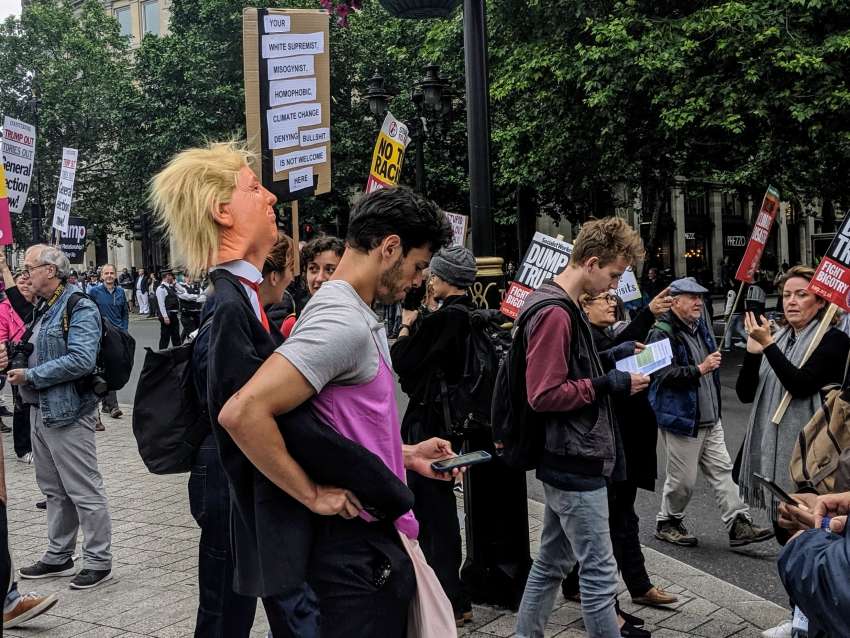 Dan, 28, re-purposed an old costume into his protest outfit | Picture: Reporter’s own

Not only are they grand occasions filled with wreath-laying and suited handshakes, they’re also crucial times for the two nations to strengthen their relationship.

There was a crucial theme among those spilling from nearby train stations and bus stops into the square; divisiveness.

As British lawmakers struggle to form a withdrawal agreement from the European Union, and with Theresa’s May’s own stepping down kicking-off a chaotic dash to nominate a new PM, many couldn’t fathom how Trump would shake up a country already divided and drained by Breixt. 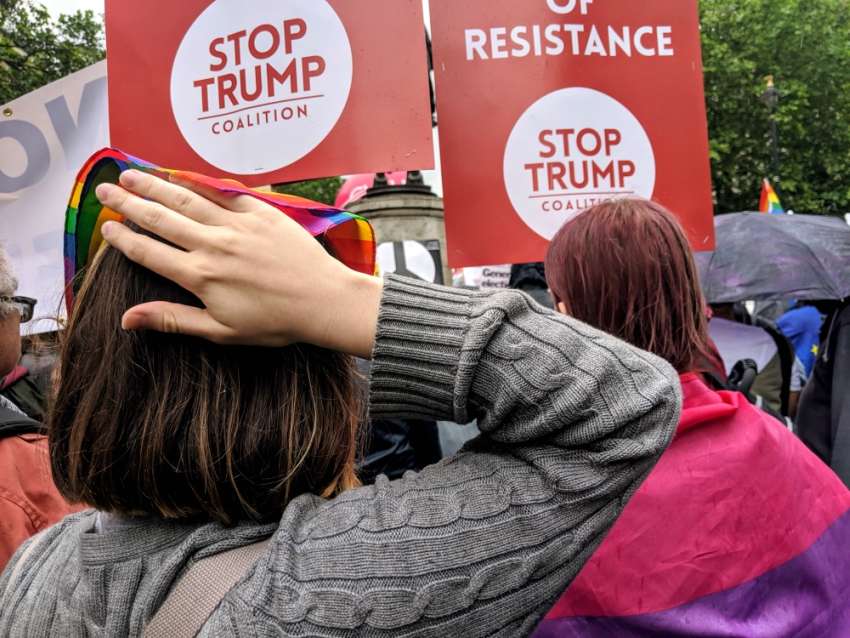 Considering that the president proposed , the pro-Brexit former foreign secretary, as his preferred candidate for PM, Brexit will inevitably haunt and define his time in the UK.

After repeated awkward delays across two years, Trump’s arrival at 9.00am yesterday in London Stansted, an airport roughly 42 miles northeast of the capital, kicked-off his three-day state visit.

The high-profile and precisely-scheduled engagement is full of meetings about diplomatic issues, tea with the Queen, and flights to different parts of the UK.

It’ll be a trip, if history is any indication, full of tweets from the provocative president.

While his Air Force One landed smoothly to blue skies, Trump’s trip will likely be full of turbulence and headline-making comments.