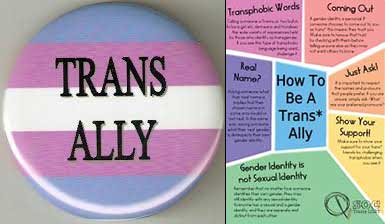 Received this from Equality PA, and thought it was worth passing on.

With the recent statement rescinding the guidance to follow Title IX (Nine) and protect transgender students from discrimination, the Trump administration is sending a message to transgender kids that the President of the United States doesn’t have their backs.

Every student should be treated fairly and equally under the law, and protecting transgender students helps ensure that they have the same opportunity as their classmates to fully participate in school.

The Trump administration’s decision to rescind this guidance has no impact on schools that are already doing the right thing in line with this guidance – they can, should, and will continue to protect transgender students.

Revoking this guidance is indicative of the administration’s disregard for transgender youth and the many challenges they face. While it may not have a legal impact, it sends an alarming message that bullying and harassment are ok.

The LGBT community will continue to fight until every child has a fair chance to succeed in school and prepare for their future—including students who are transgender.

Here are three things you can do now to support transgender students:

So far during Trump’s administration, the American people have been pretty successful at pushing back and getting the administration to back away from heinous actions. Doing these three things TODAY can help. Don’t put it off and don’t leave it for someone else to do. Take action now!