Home Gay Life To men who say the gender pay gap doesn’t exist: I was... 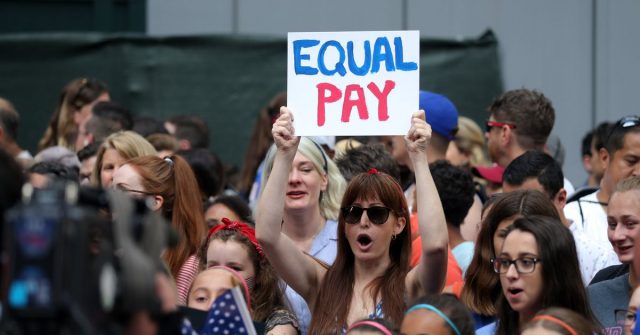 It was an echo of the crowd’s cheer following their victory in Lyon, France, and the same thing that working women and the men who support them have been demanding for decades: equal pay for equal work.

Their cries fall upon deaf ears for so many men, however, who perpetuate claims that the gender pay gap is but a myth.

A male clinical psychologist from Ireland who writes for the conservative publication, The Federalist, went even further this week, in an attempt to drown out those cheering throngs; He argued that the Women’s National Team actually outearned the men.

“Yes, There Is A Soccer Pay Gap,” shouted the headline. “The Women Make More Than The Men Do.” He also claimed “men’s team sports are inherently more entertaining to watch than women’s,” but that’s an argument for another time. Let’s focus on the money for now.

“Last year, the men’s World Cup in Russia generated more than $6 billion in revenue; the participating teams shared about $400 million,” wrote Dr. John Glynn. “That is less than 7 percent of overall revenue. Meanwhile, the 2019 Women’s World Cup made somewhere in the region of $131 million, doling out $30 million, well more than 20 percent of collected revenue, to the participating teams. It seems a pay gap does exist, after all.”

I recognize what Dr. Glynn and condescending men like him are doing, either by spinning their numbers to their favor or denying the fact that women earn less in sports and so many other areas. I know because I lived as one of them. I’m a transgender woman who did a very convincing imitation of being a cisgender straight man for almost 40 years, so I know their tricks, and I’ve been there when they whispered and conspired. On the day I came out, I had a male boss who joked that this was great news, because he could now pay me 70-cents on the dollar he paid me as a man. Ha.

I trust the National Women’s Law Center and the American Association of University Women to give it to me straight, without mansplaining. Click those links, and see for yourself how “the gender pay gap is real, persistent, and harmful to women’s economic security.”

Plus, there’s one more person I trust: The Washington Post Fact Checker, Meg Kelly. who has the unenviable job of counting all of President Trump’s lies (more than 10,000 so far, and still counting).

For an article this week in the Post, Kelly considered the question of whether the U.S. women really do earn less than the men. She started with the lawsuit filed by the USWNT against U.S. Soccer Federation earlier this year, which suggested the following scenario: let’s say both men’s and women’s teams played 20 friendlies in a year, how much would a top-tier women’s national team player earn compared to a man, according to that scenario?

“We calculated the player on the women’s team would earn $28,333 less, or about 89 percent of the compensation of a similarly situated men’s team player. If both teams lost all 20 games, the players would make the same amount. That’s because the men earn a $5,000 bonus when they lose and the women have a $100,000 base salary.”

Kelly noted that under the women’s new bargaining agreement, players can also earn attendance bonuses, payment for commercial appearances and per diems that are equal and tied to what the men can earn.

So what about the World Cup? Well, understand that FIFA awards all prize money to the winning country’s federation, and determines how much they get. In this case, that’s the USSF — which in turn distributes the money to the players based on each team’s collective-bargaining agreement.

As Dr. Glynn noted, total prize money for the Women’s World Cup in 2019 is $30 million, giving the 23 world champions a total of about $4 million. Compare that to $38 million the 2018 Men’s World Cup champions from France won, from a total pool of about $400 million. So, uh, Dr. Glynn, sorry, but instead of comparing apples and oranges by looking at both U.S. teams, Kelly found that the French champions from the 2018 men’s world cup were awarded more than nine times more total prize money than the 2019 U.S. women’s tournament champs.

“So there’s no question that there’s a huge gap in earning potential here,” wrote Kelly.

She also spoke to two attorneys who denounced the USSF for sexism in how they dole out that money. The bottom line, she wrote:

“Are the women players paid less? Sometimes. When the female players have appeared to make about the same or more money, they’ve had to turn in consistently outstanding performances on the world stage. Even with those feats, earning the same amount as the men’s soccer players was near-impossible under the previous collective-bargaining agreement.

“The new agreement has provisions that may reduce the difference in bonuses for friendly games and tournaments, but there is — without question and for whatever reasons — still a massive gap between men’s and women’s World Cup bonuses.”

Guys (specifically, cis hetero dudes): we know when you’re lying. And you’re lying. You make up shit about men needing to earn more because they’re the breadwinner, when you know lots of couples these days have two breadwinners, sometimes two men, sometimes two women, sometimes straight couples earning two incomes. You make noise about how men should earn more than women who take time off for periods and menstrual cramps and pregnancies. You think that your old boys club will circle the wagons around you and protect you when we march into your executive boardrooms and smash your glass ceilings and play on your pitches as you sit on your couches watching us win world championships.

To his credit, USSF president Carlos Cordeiro acknowledged the chants of “equal pay” — as well as some boos — at NYC’s celebration for the Women’s National Team on Wednesday.

“We believe at U.S. Soccer that all female athletes deserve fair and equitable play,” Cordeiro said. “And together, I believe we can get this done. Because as this team has taught us, being the greatest isn’t just about how you play on the field, it’s about what you stand for off the field. It’s about who we are as a sport and as a country.”

But let me quote Megan Rapinoe, who endorsed Cordeiro despite his mangling of her last name, and gave him the team’s support, by saying everyone in a position of power gets booed.

In the midst of a speech that’s been hailed as epic and eloquent, Rapinoe turned to Cordeiro and said she looked forward to “holding those feet to the fire.” So say we all.

Click below or click here to see what else Rapinoe said, about being better, and doing better, for everyone, or scroll down to read a partial transcript of that part of her speech.

“It’s our responsibility to make this world a better place.”

“There’s been so much contention in these last years. I’ve been a victim of that, I’ve been a perpetrator of that. With our fight with the [U.S. Soccer Federation], I’m sorry for some of the things I said. Not all of the things. But it’s time to come together.

“This conversation is at the next step. We have to collaborate. It takes everybody.

“This is my charge to everybody: Do what you can. Do what you have to do. Step outside yourself. Be more, be better, be bigger than you’ve ever been before.

“If this team is any representation of what you can be when you do that, please take this as an example. This group is incredible. We took so much on our shoulders to be here today, to celebrate with you today, and we did it with a smile.