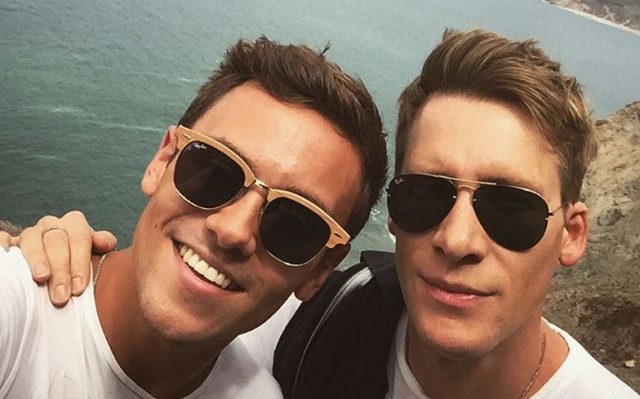 Tom Daley appeared on the Radio 1 Breakfast Show this morning, where he was quizzed by Grimmy and Matty from the 1975 on green pools and Olympic medals.

After gossiping about Rio and the aftermath, they quickly moved on to the diver’s relationship with Dustin Lance Black.

When asked about a date for the wedding, Tom replied: “The date hasn’t officially been set yet but we’re thinking some time early next year, maybe spring next year.”

“Will it be diving themed?” quipped Matty. “It’s swimwear only, that’s the dress code,” joked Tom.

“I have no idea about, like, where it’s gonna be, what’s going to happen,” he added. Although his big challenge of the Olympics is over, Black is currently working on his upcoming miniseries When We Rise. Currently editing in Los Angeles, he posted a goodbye to Instagram the other week.

Dear UK, please take good care of this one while I'm away finishing #WhenWeRise. Sad to have to go so soon. ??✈️??

Tom explained he’ll be heading to LA next week to join his fiancé.

Later, he gave a shoutout to Dustin, who was listening live. Apparently, he stayed up until 1am in California.

You can listen to the whole interview right here: