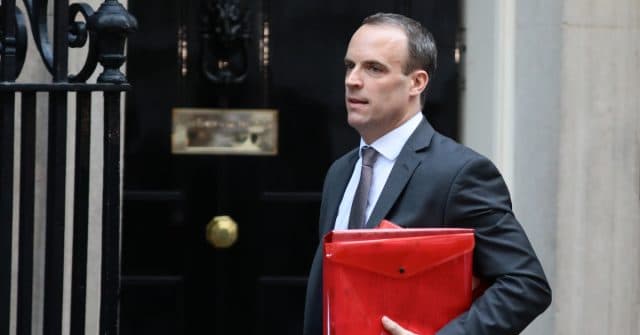 Dominic Raab has come out against potential changes to the Gender Recognition Act which would make things easier for transgender children, as he ramps up his campaign for the Tory leadership contest.

Raab is one of the frontrunners in the race to succeed Theresa May at 10 Downing Street.

Though Brexit is dominating much of the debate around the contest, the next prime minister will also inherit the responsibility of reforming the Gender Recognition Act, which governs the rights of trans people.

Speaking to The Independent on Thursday (May 30), Raab said that he wants a society which is “tolerant and warm” to LGBT people, but thinks government should be “very careful” about transgender rights.

“I certainly don’t think I want to make it easier [for a young person to transition],” he said.

“I think you need to be very careful with people of that age.”

He added that while he wants “everyone to feel comfortable in their own skin,” he worries about “the vulnerability of other people” such as “children at a very tender age in school.”

Mermaids, the charity which supports transgender children and young people, told PinkNews that it is “concerned” about Raab’s choice of phrase.

“His intentions may be sincere but his words will have sent a chill down the spines of many parents and anyone who understands the Equality Act,” a spokesperson said.

“We’re concerned that he seems to imply trans children might pose a threat to their friends and classmates.”

“Raab is right to worry for vulnerable transgender kids and we need brave politicians to step beyond their own ideologies and instant emotional responses and listen to children and parents who are simply trying to cope with homework, GCSEs and SATs, lost PE kits and everyday playground spats, without being misunderstood by politicians who don’t yet understand the reality of their daily lives.”

As it stands, young transgender people have limited options available to them until they turn 18.

All trans people have the right to live as their proper gender, which includes accessing single-sex spaces such as bathrooms.

A young trans person can change their name and request to be addressed by their preferred pronouns at school or college, but cannot apply for an updated birth certificate to reflect their gender until they are 18.

The standard NHS treatment for trans children with a medical diagnosis of gender dysphoria is to delay puberty through hormone blockers—a treatment which is reversible.

A 2018 consultation on the Gender Recognition Act included questions on removing the requirement for a medical diagnosis for people of all ages seeking a legal transition, and giving young people the right to have their documents updated.