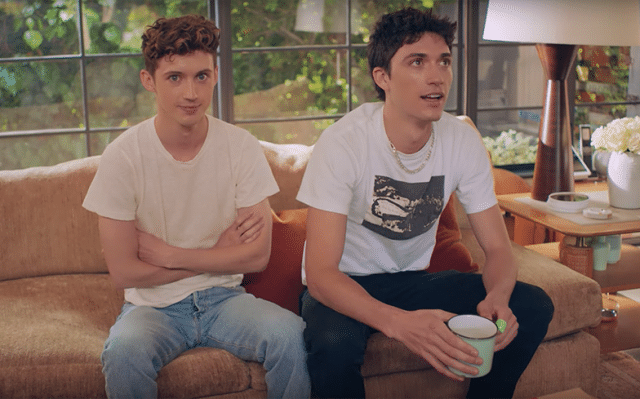 The Aussie performer walked through the California home of his manager and discussed life on the road, his songwriting process, being labelled a gay icon and his debut film role in the conversion therapy drama, Boy Erased.

He was later joined by his boyfriend, model, photographer and former GAY TIMES cover star Jacob Bixenman. The interviewer took advantage of having them in the room and asked them several questions, including “who is your celebrity crush?”

Their reaction to each other’s responses are hilarious – watch below.

Troye Sivan is currently touring the world in support of his critically-acclaimed sophomore album, Bloom, which features pop anthems such as My! My! My!, Dance To This, Lucky Strike, Animal and the title track.

Last year, he received a Golden Globe nomination for his track Revelation, which was taken from the Boy Erased soundtrack.

Earlier this year, Troye garnered his two biggest hits in the UK to date: 1999 with Charli XCX, which became his first top twenty single, and I’m So Tired with Lauv, which charted at number eight.

He has also teamed-up with Charli once again for her upcoming, self-titled third studio album on 2099, which we presume will be a futuristic spin-off of their first collaboration. Listen to 1999 below.