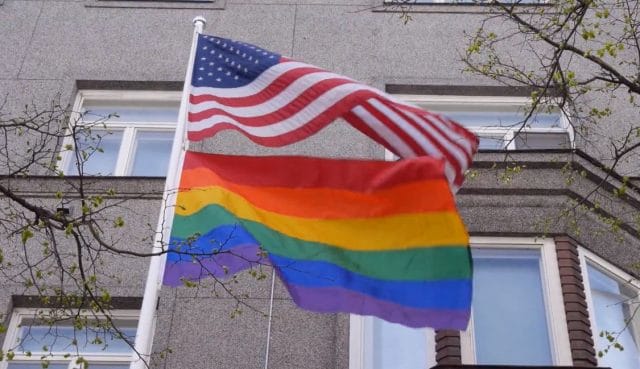 Just a week after President Trump celebrated June as “LGBT Pride Month” in a tweet, his administration has rejected requests from U.S. embassies to fly the rainbow flag on flagpoles during Pride month, three U.S. diplomats told NBC News.

Diplomats say that U.S. embassies in Israel, Germany, Brazil and Latvia were denied permission from Trump’s State Department to fly the pride flag on their flagpoles.

The U.S. diplomats told NBC News that the Trump administration instructed embassies that they can display the pride flag other places, including inside embassies, but that requests to fly it on the flagpole must be specifically approved. No approvals have been granted as of this writing.

During the Obama administration,  embassies overseas were granted blanket permission to fly the pride flag during June.

Although the pride flag can and is being flown elsewhere on embassy grounds, including inside embassies and on exterior walls, the decision not to allow it on the official flagpole stands in contrast to President Donald Trump’s claim to be a leader in supporting LGBT rights overseas. Trump’s administration has announced a campaign to decriminalize homosexuality overseas and this month issued a tweet and formal statement to “celebrate LGBT Pride Month and recognize the outstanding contributions LGBT people have made.”

The denials to U.S. embassies have come from the office of the State Department’s under secretary for management, Brian Bulatao, a longtime associate of Secretary of State Mike Pompeo who also worked for him at the CIA. Under State Department policy, embassies that want to fly the flag on their flagpoles are expected to obtain permission from Washington.

The administration’s denial to fly the pride flag at the U.S. Embassy in Berlin, Germany, is particularly shocking because the openly gay U.S. ambassador there, Richard Grenell, is spearheading the administration’s push to end the criminalization of homosexuality in roughly 70 countries.

“The President’s recognition of Pride Month and his tweet encouraging our decriminalization campaign gives me even more pride to once again march in the Berlin Pride parade, hang a huge banner on the side of the Embassy recognizing our pride, host multiple events at the Embassy and the residence, and fly the gay pride flag,” Grenell said Friday in a statement to NBC News.

Pressed on whether the embassy will fly the flag on its flagpole outside the building, embassy spokesman Joseph Giordono-Scholz said only: “The pride flag will be on as many places as it can at the Embassy.”

Earlier this month, a Trump administration rule took effect barring transgender people who have undergone a gender transition or been diagnosed with gender dysphoria from enlisting in the U.S. military. In the U.K. earlier this week, Trump defended that policy by saying that transgender people “take massive amounts of drugs,” apparently referring to hormones.

His administration has also rolled back Obama administration rules designed to prevent health care discrimination against transgender people. And human rights groups have expressed concern that a new Commission on Unalienable Rights announced by the State Department this month to guide U.S. human rights policy, which emphasizes “our nation’s founding principles of natural law and natural rights,” is designed to de-emphasize efforts to protect LGBT people and woman.