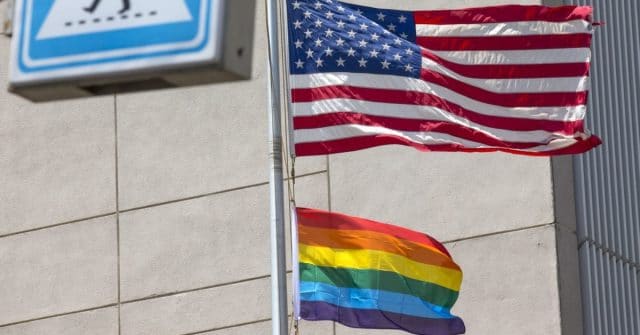 US embassies around the world have been denied the right to fly rainbow flags throughout June in honour of LGBTQ+ Pride Month.

Before an embassy can fly any banner other than the American flag, it must be granted permission by the State Department.

This year however, President Donald Trump‘s administration reportedly sent out emails to consulates in countries such as Israel, Germany, Latvia and Brazil, which stated that the pride flag was not to be displayed outside their embassies.

“[It’s] a routine thing that happens,” a source from Berlin told NBC News, explaining that there has been no problem in previous years. They continued on to say that “it’s always accepted,” but even their request that the embassy only fly the rainbow flag during the last week of the month was rejected.

While it may not be allowed to be presented on the outside of the building, German embassy spokesman Joseph Giordono-Scholz told NBC that “the pride flag will be on as many places as it can at the embassy.”

Richard Grenell, the US Ambassador to Germany, is openly gay (Sean Gallup/Getty Images)

Richard Grenell, the United States Ambassador to Germany, is the most senior openly gay member of the Trump administration and is currently leading a campaign to legalise homosexuality in the 70 countries that still criminalise it. So the fact that the Berlin Embassy isn’t allowed to show its support to the LGBT+ community publicly is rather alarming.

On 31 May, Trump tweeted: “Let us also stand in solidarity with the many LGBT people who live in dozens of countries worldwide that punish, imprison, or even execute individuals on the basis of their sexual orientation.

My Administration has launched a global campaign to decriminalize homosexuality and invite all nations to join us in this effort!”

Presumably before he learned of the flag ban, Grenell praised the President’s tweet and said that it gave him “even more pride to once again march in the Berlin Pride parade, hang a huge banner on the side of the Embassy recognizing our pride, host multiple events at the Embassy and the residence, and fly the gay pride flag.”

<p lang=«en» dir=«ltr» xml:lang=«en»>As we celebrate LGBT Pride Month and recognize the outstanding contributions LGBT people have made to our great Nation, let us also stand in solidarity with the many LGBT people who live in dozens of countries worldwide that punish, imprison, or even execute individuals….

The differences between Trump’s declarations of support for the queer community and his administration’s seemingly anti-LGBTQ+ policies has been called out by several famous faces in recent months.

Most recently, queer activist and Younger actor Nico Tortorella told BuzzFeedNews that they’d “rather see [Trump] post about it than not” because it highlights “the hypocrisy that exists within it” and encourages conversation.

“We also have to remember that he’s just the face of something that is so much larger that exists in this country,” Tortorella continued. “Look at Pride Month — there are all these companies that throw a flag on a T-shirt or something and then don’t actually support the community that you’re putting money towards … it’s a much larger issue than just one man in office.”