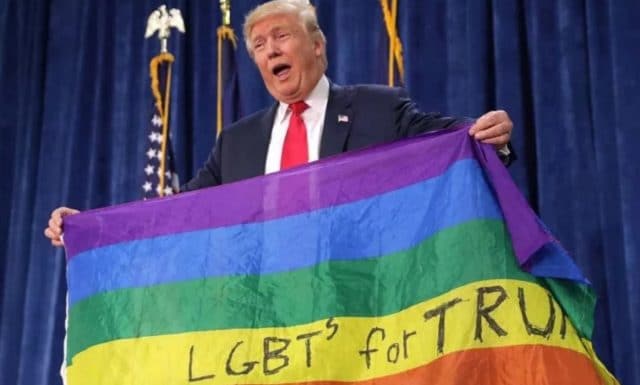 The Trump administration is attempting to deny U.S. citizenship to the children of same-sex couples born abroad, reports The Daily Beast.

According to U.S. law, a child born outside of the U.S. is granted citizenship at birth if their parents are married and at least one is a U.S. citizen.

But this policy is not being extended to married same-sex couples.

Last summer, the State Department issued new rules unilaterally changing the department’s interpretation of the Immigration and Nationality Act (INA), a 1952 law that, along with the 14th Amendment, codifies eligibility for U.S. birthright citizenship, reports the news outlet.

According to the government website, in order for a child to be considered a US citizen its father “must be the genetic parent of the child and meet all other statutory requirements in order to transmit US citizenship to the child at birth.” Additionally, it notes that if the baby is carried by its biological mother or a gestational surrogate, that person must meet those same requirements.

“Even if local law recognizes a surrogacy agreement and finds that US parents are the legal parents of a child conceived and born abroad through Assisted Reproductive Technology (ART), if the child does not have a biological connection to a US citizen parent, the child will not be a US citizen at birth,” the government website says.

And even if the parents are legally married, children carried by gestational surrogates or conceived through other methods of ART may be considered “born out of wedlock” by the state department.

Speaking to The Daily Beast, same-sex couple Roee and Adiel Kiviti said the Trump administration told them their 2-month-old daughter Kessem was born “out of wedlock” because a surrogate gave birth to her in Canada rather than in the US.

“They basically take our marriage, and they say ‘It doesn’t mean anything. Your child was born out of wedlock,’” Adiel said. “We were there when she was born, she took her first breaths in our arms. Make no mistake: We are her parents—we are her only parents on her only birth certificate.”

“We are now in a very, very strange scenario,” Adiel said. “We are both American citizens; we live in the US; I have a business here, Roee has his job here; we file our taxes as a married couple here… and the State Department is saying that our daughter isn’t entitled to US citizenship because she was born ‘out of wedlock.’”

Soon after Kessem was born, the couple contacted the U.S. consulate in Calgary to obtain a Consular Report of Birth Abroad for Kessem, which is comparable to a birth certificate.

But their request was refused.

The consulate asked the couple to provide proof of their marriage in the form of their original marriage certificate, which they didn’t have. So they traveled back to the U.S., with just Kessem’s Canadian passport.

The couple had not encountered these issues in 2016 when their son Lev was born in Canada.

“This is a very clear attack on families, on American families,” Roee told The Daily Beast. “Denying American married couples their rights to pass their citizenship, that is flat-out discrimination, and everyone should be concerned about this.”

The policy also impacts binational couples, in which one parent is a US citizen and the other is not, who have children outside the US.

One such married couple is Andrew and Elad Dvash-Banks, who have taken their case to court, as Slate reported.

Their case, which was filed on behalf of Immigration Equality, details that Andrew is an American citizen and his husband Elad is an Israeli citizen. Their sons, twin boys, were carried by a gestational surrogate and born in Canada, according to Slate.

Officials claimed that he was “born out of wedlock.”

“We’re outraged that the State Department is so intent on harming our family and the LGBTQ community,” Andrew and Elad said in a joint statement to Immigration Equality. “The fight is not over, and we will not rest until our family is treated fairly and equally. Nothing can tear us apart. The four of us are unbreakable.”

For others, like Roee and Adiel and their daughter Kessem, the question of citizenship still hangs unanswered.

“Where is my child supposed to live? Is she supposed to go back to Canada? Can I live there?” Adiel told The Daily Beast. “The scenario is just ridiculous. I cannot believe that these are the values of the American government.”