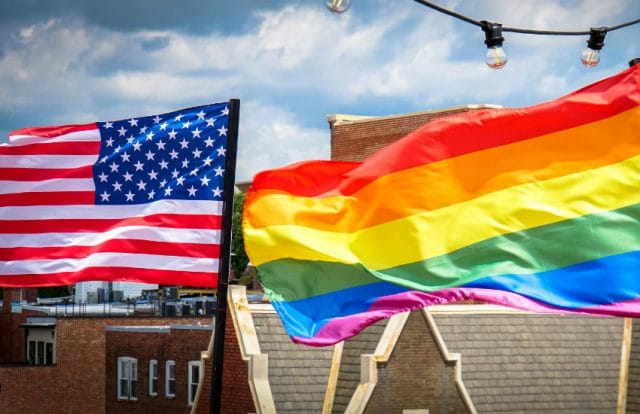 The Trump administration, in another move against the LGBTI community, is rejecting US embassies’ request to fly rainbow flags for Pride month.

This comes only days after Donald Trump acknowledged Pride Month in his presidency.

Three American diplomats confirmed the reports from the embassies to . They said requests from Israel, Germany, Brazil and Latvia have all been denied request to fly rainbow flags outside their buildings.

While the embassies are allowed to display the rainbow flag elsewhere, including inside the buildings, they are not allowed to fly it on the main flagpole.

According to NBC’s reporting, Brian Bulatao, the State Department’s undersecretary for management is the one issuing the denials.

This is also another reversal of policy during Barack Obama’s presidency. His administration allowed embassies to fly the Pride flag.

In a statement to NBC, he still expresses a willingness to fly the Pride flag, despite these denials.

‘The President’s recognition of Pride Month and his tweet encouraging our decriminalization campaign gives me even more pride to once again march in the Berlin Pride parade, hang a huge banner on the side of the Embassy recognizing our pride, host multiple events at the Embassy and the residence, and fly the gay pride flag,’ he said.

German embassy spokesman Joseph Giordono-Scholz, when asked if the rainbow flag would fly on the main flagpole, responded: ‘The pride flag will be on as many places as it can at the Embassy.’

This move will likely be widely supported by Republicans, who relating to this matter.

The bill banned any flag or emblem from flying at US embassies other than the American flag. Though the bill didn’t pass, it was in January.

The late Gilbert Baker created the rainbow flag as a symbol for the LGBTI community.

As Baker wrote in his , before the rainbow flag, the symbol of the community was the pink triangle. This image, however, had a dark history in its association with World War II and the Holocaust. Nazis made gay men in concentration camps wear pink triangles to label them.

‘I thought of the American flag with its thirteen stripes and thirteen stars, the colonies breaking away from England to form the United States,’ he wrote.

‘I thought of the vertical red, white, and blue tricolor from the French Revolution and how both flags owed their beginnings to a riot, a rebellion, or revolution,’ before continuing, ‘I thought a gay nation should have a flag too, to proclaim its own idea of power.’