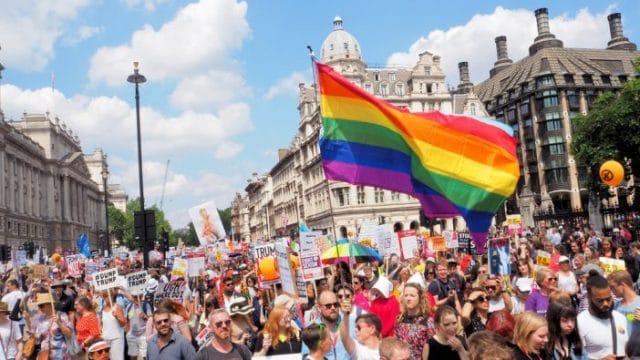 NBC News reports that Trump’s state department has forbidden at least four requests from U.S. embassies around the world to fly the rainbow flag during Pride month. These embassies include Brazil, Germany, Israel and Latvia. Obama had approved similar requests in the past.

“Although the pride flag can and is being flown elsewhere on embassy grounds, including inside embassies and on exterior walls,” NBC writes, “the decision not to allow it on the official flagpole stands in contrast to President Donald Trump’s claim to be a leader in supporting LGBTQ rights overseas.”

During his Pride month announcement, Trump wrote, “My Administration has launched a global campaign to decriminalize homosexuality and invite all nations to join us in this effort!” However, many see his global campaign as a “thinly veiled attempt to shame Iran for human rights violations” and have pointed out the numerous examples of Trump rolling back LGBTQ civil rights at home.

“The denial to the U.S. Embassy in Berlin is particularly jarring because the ambassador to Germany, Richard Grenell, is spearheading an administration push to end the criminalization of homosexuality in roughly 70 countries that still outlaw it, as NBC News first reported in February. Grenell, the most senior openly gay person in Trump’s administration, has secured support for that campaign from both Trump and Vice President Mike Pence.”

In a statement issued yesterday, Grenell said that the Berlin embassy has still hung a large banner outside of its building. Grenell will also walk in the German capital’s Pride parade. Other embassies may take similar measures to show their support during Pride month, but it’s unclear how many will.

In the last month alone, the Trump administration has ramped up its attacks on LGBTQ rights including denying medical care to trans people, tearing apart bi-national same-sex families, opposing the Equality Act and throwing trans people out of homeless shelters.