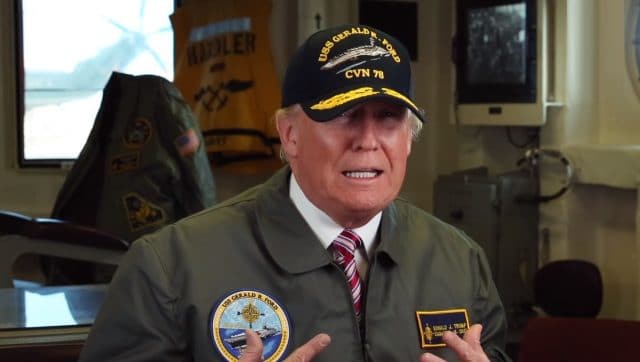 British commentator Piers Morgan pressed President Trump in an interview about his tweet this week in support of the LGBTQ community while issuing a ban on transgender people from serving in the military.

In an interview that aired Wednesday on “Good Morning Britain,” Morgan asked Trump why he felt the “need to ban transgender people” from serving their country.

“This week, you tweeted your support for the LGBT community around the world where they’re being persecuted or excluded,” Morgan said. “Which does prompt the obvious question: If you feel that protective of the LGBT community, why did you feel the need to ban transgender people from serving in the U.S. military?”

Morgan pushed back, noting that the cost of medication for transgender troops is “minuscule” compared to the U.S. military’s budget.

“The U.S. military spends a lot more money on, for example, giving Viagra to servicemen than it does actually on medical bills for transgender people,” the host added.

Trump said he had not heard of that statistic.

“So it just seems to me an unnecessary thing for a guy who wants to be supportive of the LGBT rights and the community around the world, that you’ve taken this action,” Morgan told the president.

Trump responded, “It is what it is.”

The president then claimed that many service members were joining the military, requesting operations and then taking time off for recovery.

“You have to have a standard and you have to stick by that standard,” Trump said in the interview. “We have a great military and I want to keep it that way. And maybe they would be phenomenal, I think they probably would be.”

“But, again, you have very strict rules and regulations on drugs and prescription drugs and all of these different things. And they blow it out of the water,” the president added.

‘You have to have a standard and you have to stick by that standard.’

The POTUS defends his decision to ban transgender people from serving in the military.@piersmorgan | #GMBTrump pic.twitter.com/heBUjhwiUH

In response to Trump’s tweet recognizing June as LGBT Pride Month, a recognition he had failed to do for the past two years, several LGBTQ organizations blasted the president’s hollow message.

Chad Griffin, president of the Human Rights Campaign, one of the country’s largest gay rights organizations, was clearly disgusted by the president’s comments, tweeted: “You can’t celebrate Pride and constantly undermine our rights — including attacking #TransHealth, discharging #TransTroops, refusing to protect LGBTQ youth, and cozying up to dictators who brutalize & marginalize LGBTQ people. This is gross hypocrisy, with an emphasis on gross.”

Kenneth Roth, executive director of Human Rights Watch, an organization that investigates and reports on human rights abuses around the world, noted: “Trump plans a global push to decriminalize homosexuality,” he said on Twitter. “Great, but that’s only step one. Step two is fighting discrimination against LGBT people, but Trump instead is promoting it.”