Home Gay Life Trump Shares A Laugh With Putin After Joking About Getting ‘Rid Of’... 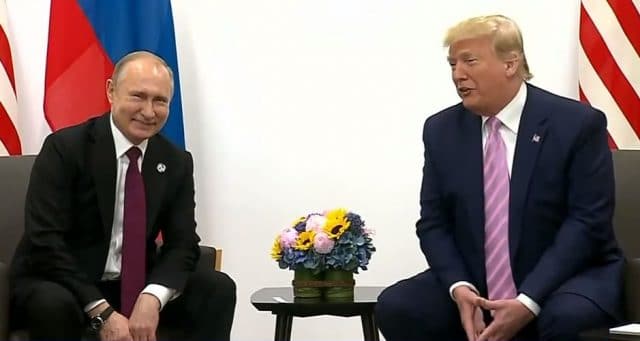 President Trump on Friday shared a laugh with Russian President Vladimir Putin about getting “rid of” the “fake news” journalists during a bilateral meeting at the Group of 20 summit in Osaka, Japan, reports the Guardian.

Trump took a jab at the press as reporters were ushered out of the room ahead of their first formal meeting in nearly a year, according to Bloomberg’s Jennifer Jacobs, who is traveling with the president.

“Get rid of them. Fake news is a great term, isn’t it? You don’t have this problem in Russia, but we do,” Trump said.

Putin responded in English, “We also have. It’s the same.”

Dozens of Russian journalists and critics of Putin have turned up dead over the years, and Russia ranks as one of the worst countries in terms of press freedom, according to the World Press Freedom Index.

According to the Committee to Protect Journalists (CPJ), at least twenty-six journalists have been murdered in Russia since Putin first became president, many of them investigative reporters who were scrutinizing governmental abuses.

In March, Russian lawmakers passed legislation to outlaw the publication of “fake news” if it is deemed a threat to public health and security.