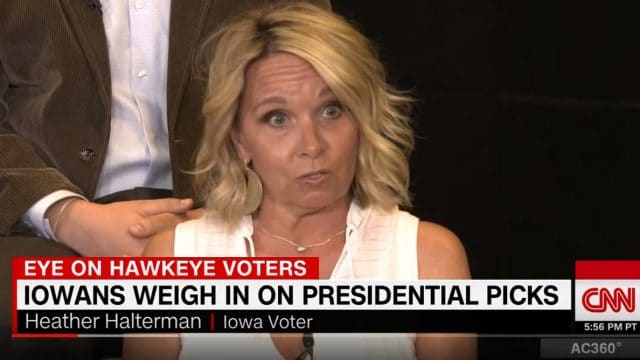 With the 2020 presidential election more than a year away, CNN asked some Iowa voters to weigh in on their top picks.

CNN’s Randi Kaye began by asking how many in the group plan on voting for Trump or Biden in 2020.

Among the 10 voters on the CNN panel, four said they plan on voting for Trump, while three plan to cast their vote for Biden.

Republican Frank Moran said he voted for Trump in 2016 and plans to again because “the economy is booming where I just feel as though everything that I’ve been wanting to have done is being done.”

When panelist Heather Halterman was asked why she likes the president, she said it’s because “he’s working on border control which I think is really important.”

Independent voter Noah Hamoud says that he’s voting for Biden because “he can do a good job of bringing the country together.”

“If we can move past rhetoric and bring in someone who’s more respected worldwide, I think we can have a better country from that,” he said.

Responding to some of the Trump voters on the panel, Pete Buttigieg supporter Katie Carlson said she doesn’t know how people can support Trump in light of what she sees as his blatant misogyny.

“I don’t know how you can possibly paint that broad of a brush and just say not only a Republicans but just Americans are pleased with who we have,” Carlson said. “As a woman, it is frustrating, depressing, and frightening to hear people just brush aside the misogynistic things that Donald Trump has done.”

She then explained that she finds Buttigieg “inspiring, he has a message that can restore the unity that we’re looking for. I think as a veteran too, he would — he would represent us well across the world.”

Then Kaye asked Halterman if it bothers her “when the President lies?”

“I think a little — I mean, yes, it does,” Halterman replied. “It doesn’t change my vote for him.”