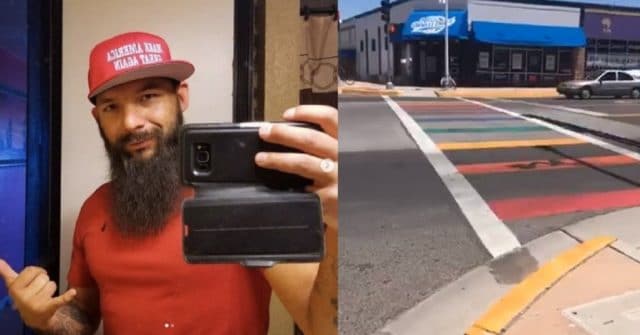 A Trump supporter has been arrested on suspicion of vandalising a rainbow crossing in Albuquerque, New Mexico.

Anthony Morgan, 32, is believed to have been part of a group of bikers who were filmed performing burnouts over the Route 66 road crossing, which was unveiled at the start of June to celebrate Pride month.

The city had splashed out $30,000 to fund the four rainbow crossings ahead of the city’s Pride festivities.

The road markings were intended to last several years, but were defaced on June 5, just days after being unveiled.

According to the Albuquerque Journal, he was identified thanks to pictures he uploaded on his Instagram, which were compared to the video of the incident.

In his Instagram photos, Morgan can be seen wearing a ‘Make America Great Again’ hat.

A video captured the bikers performing burnouts over the Albuquerque rainbow crossing.

The newspaper reports that he is believed to be a member of the Malicious Riders biker gang.

Albuquerque mayor Tim Keller, a Democrat, said in a statement: “I’m proud of Albuquerque for stepping up and helping police identify this offender.

“We are an inclusive city, and this arrest sends a strong message that we will not tolerate attempts to divide us.”

The city moved to immediately restore the crossing after the incident, with repairs costing around $1,800 to repair two of the stripes.

Craig LaBerge-Esparza, president of Albuquerque Pride, told Kob4: “No one knows but the perpetrators themselves, what their motivation was, but it’s hard when you look at exactly what happened it’s hard not to think that it was a personal attack on our community.”

In a Facebook video, he added: “It does not matter what a few motorcycles want to do to try to spread hatred and negativity, because we are still going to come out and march through this rainbow crosswalk, and show them that we will be seen and we will be heard.

“We march for our youth in our community who need to feel supported, for our transgender community.

“We march for them, and we celebrate our colours. Do not let any negativity bring us down, and use it as motivation.

“Use it as a reminder of why we march and why we have this parade. We are more than just a rainbow crosswalk.”

The Albuquerque Pride parade took place on June 8, with thousands of people taking part in the annual celebration.

Several cities across the world have introduced rainbow crossings.