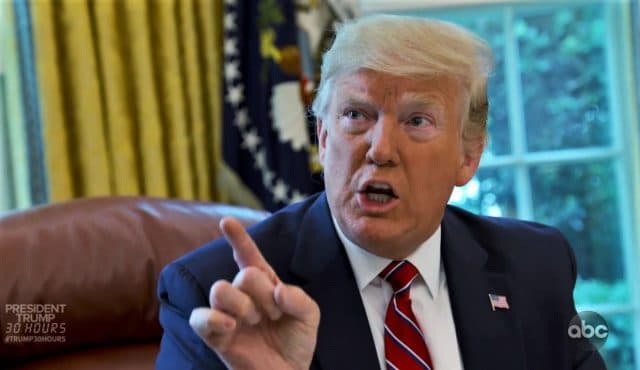 President Trump appeared to threaten a Time magazine reporter with prison time after a photographer tried to take a picture of a letter from North Korean leader Kim Jong Un, The Washington PostTime reports.

During an interview with the publication in the Oval Office on Monday, Trump asked the reporters to go off the record while he showed them the letter he received from the brutal dictator, whom Trump has claimed to have fallen “in love” with.

“Here’s a letter, O.K., now I’m going to show you this letter,” Trump said according to the transcript. “So this was written by Kim Jong-un. It was delivered to me yesterday. By hand.”

The photographer appears to have attempted to snap a photo of the letter, but White House press secretary Sarah Huckabee Sanders said it was not allowed.

Later on in the interview, the publication asked the president about former Trump campaign manager Corey Lewandowski, who testified that the president, “under threat of prison time,” told him to direct former Attorney General Jeff Sessions to reverse his recusal from the DOJ’s investigation into Russian election interference.

Rather than answer the question, Trump lashed out about the photographer’s attempt to take a shot of the letter from Kim.

“Excuse me,” Trump said. “Under Section II — well, you can go to prison instead, because, if you use, if you use the photograph you took of the letter I gave you … confidentially, I didn’t give it to you to take photographs of it.

“So don’t play that game with me,” Trump said.

“I’m sorry, Mr. President,” the reporter responded. “Were you threatening me with prison time?”

“Well, I told you the following. I told you you can look at this off-the-record. That doesn’t mean you take out your camera and start taking pictures of it. O.K.?” Trump said. “So I hope you don’t have a picture of it. O.K.?”

“You can’t do that stuff,” he continued. “So go have fun with your story. Because I’m sure it will be the 28th horrible story I have in Time magazine. … With all I’ve done and the success I’ve had, the way that Time magazine writes is absolutely incredible.”

“So I hope you don’t have a picture of it,” he continued. “I know you were very quick to pull it out — even you were surprised to see that. You can’t do that stuff. So go have fun with your story. Because I’m sure it will be the 28th horrible story I have in TIME Magazine because I never — I mean — ha. It’s incredible. With all I’ve done and the success I’ve had, the way that TIME Magazine writes is absolutely incredible.”

Speaking about his relationship with the North Korean leader at a campaign rally in West Virginia last September, Trump told the crowd: “I was really being tough – and so was he. And we would go back and forth. And then we fell in love, okay? No, really – he wrote me beautiful letters, and they’re great letters.”

“They’re great letters. We fell in love,” he added.