Home Gay Life Trump Warns ‘The Left’: ‘It Would Be Very Bad’ If My Military,... 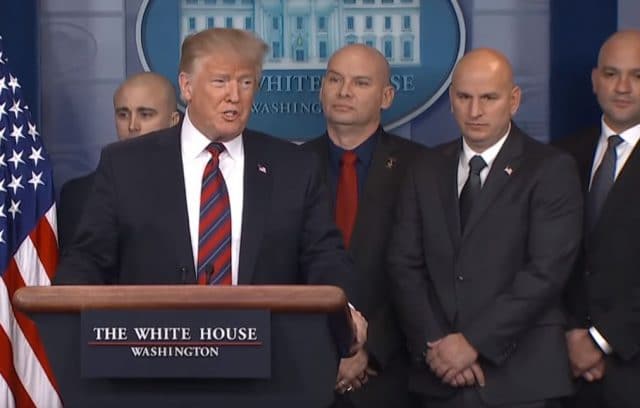 In an Oval Office interview with Breitbart News earlier this week, President Trump issued an ominous warning to Democrats that his supporters are “tough people” that will not play it tough until they are provoked and pushed “to a certain point.”

“You know, the left plays a tougher game, it’s very funny,” he said. “I actually think that the people on the right are tougher, but they don’t play it tougher. Okay?”

The quote prompted criticism and alarm from Brendan Nyhan, a University of Michigan public policy professor who co-founded an initiative monitoring the state of U.S. democracy.

“This is how an authoritarian talks. Happening right in front of us,” said Nyhan on Twitter.

“We can’t sugar-coat this. The President of the United States is encouraging the military, police, and bikers to violently attack his critics on the left,” liberal journalist Judd Legum tweeted.

“In which the president of the United States threatens street violence against his political opponents,” the liberal advocacy group Public Citizen tweeted. “What happens if Trump loses in 2020? Is that the ‘certain point?’”

Trump in December expressed confidence that his supporters will “revolt” if he were impeached.

Asked if he was worried about getting impeached, Trump told Reuters late last year that “it’s hard to impeach somebody who hasn’t done anything wrong and who’s created the greatest economy in the history of our country.”

“I’m not concerned, no,” he said during the Oval Office interview. “I think that the people would revolt if that happened.”

Trump’s former lawyer and fixer Michael Cohen warned that Trump would not allow for a “peaceful transition of power” if he lost the 2020 election during his testimony to Congress in February.

“Given my experience working for Mr. Trump, I fear that if he loses the election in 2020, that there will never be a peaceful transition of power,” Cohen told lawmakers.

According to the Star:

Trump also endorsed violence against protesters at some of his rallies in 2016. At one rally in Iowa, he urged his supporters to beat up anyone getting ready to “throw a tomato,” saying, “Knock the crap out of them…I promise you I will pay for the legal fees.”